Alcids at the Aquarium: bird feathers as health tools

First of all: What is an alcid? It’s a type of seabird that’s a member of the auk family and breeds in the colder parts of the northern hemisphere. The Aquarium’s Bird & Shores exhibit is home to several of these black-and-white diving seabirds with short necks: guillemots, murres, auklets and puffins.

The pigeon guillemot is one of the few alcids who lay more than one egg at a time, and this bird is known for its high-pitched vocalizations. Among these diving birds, the common murre, which is often confused for a penguin, stands out for diving 350–400 feet below the surface! When you see a rhinoceros auklet at the Aquarium, you may notice the little “horn” near the base of its upper bill that inspired its name. The tufted puffin looks like it’s flying underwater as it captures up to 20 small fish in its bill!

Our animal care specialists work hard to keep the animals in the Aquarium’s care healthy and comfortable, and alcids are no exception. Feathers present a noninvasive way to monitor the health of alcids both here at the Aquarium and in the wild. Unlike drawing blood, feather analysis does not require capturing or handling the birds.

While a feather is growing, it receives a supply of blood, which is cut off when the feather stops growing. As a result, hormones present in blood are incorporated into the feather during growth. The alcids in our exhibit molt old feathers and regrow new ones twice a year. After a feather is molted, it’s collected by Aquarium staff to extract and analyze the hormones present. Hormone levels of many types, including reproductive, metabolic and stress-related hormones, provide insight into the health of the bird. 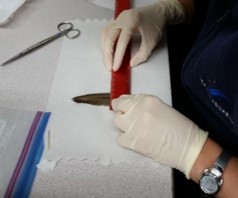 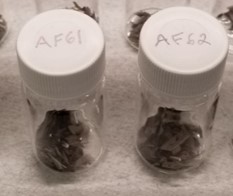 To establish a baseline of normal levels within our known healthy alcids, a feather has been collected since 2016 from each of the alcids by the staff veterinarian during the birds’ annual physicals. In addition, Bird and Mammal team staff also monitor the exhibit, looking for any molted feathers to be collected opportunistically. Next the feathers are brought to the Aquarium lab, measured, weighed and cut up into small pieces for the extraction process. After the sample extract is concentrated, it can be measured for various hormone levels using enzyme immunoassay (EIA) kits. These baseline numbers are then compared to feathers from alcids that are suspected to have abnormal hormone levels.

Alcids are becoming increasingly threatened by climate change and decreasing populations of the types of fish they consume. The tufted puffin population along the California, Oregon and Washington coasts, for example, has decreased 90% since 2000 and is currently being considered for listing as endangered under the Endangered Species Act (ESA) and is already listed as endangered in Washington state. Measuring reproductive, metabolic and stress hormone levels in alcids is important to understanding their complex physiology during reproduction, different seasons, times of food scarcity and stressful events.

You can see these alcids—and other marine birds—for yourself during your next visit to the Aquarium.