ALL ABOUT AMAZING CEPHALOPODS!

These animals are so amazing that we’re devoting an entire week to them—but, first things first, what exactly are they?

Cephalopods are a class of marine mollusks that includes squids, cuttlefishes and octopuses. They share many common characteristics: they can move by expelling water from a tubular siphon under their heads; they have arms (which usually have suckers) around the fronts of their heads; they have three hearts and highly developed eyes; and they squirt ink to hide and/or defend themselves. The Greek word “cephalopod” translates to “head-foot” and refers to the way the animals’ many legs attach directly to their heads, rather than their bodies. (Imagine if your legs attached directly to your head—how interesting would that look?!)

These animals are probably the most well-known of the cephalopod species that make their homes at the Seattle Aquarium. And with good reason—their comparatively large size makes them easiest to see! Giant Pacific octopuses, or GPOs, earn their name and then some: they’re the world’s largest species of octopus and found right in the waters of Puget Sound and the Salish Sea (how cool is that?). When mature, they average about 90 pounds—but they’re known to reach up to 150, with the largest authenticated weight coming in at 156 pounds. Check out our activity sheet to learn about octopus species around the world!

To further illustrate their size, the arm span of a GPO can be up to 20 feet across (that’s roughly the height of a two-story building!). And, not surprisingly, they need plenty of food to nourish their becoming-giant selves. GPOs have huge appetites and can eat 2–4% and gain 1–2% of their body weight each day—which is the equivalent of a 150-pound person eating up to six pounds of food gaining up to three pounds every single day (which some of us may feel like we’re already doing while we stay safe at home to curb the spread of COVID-19!). But, unlike humans, they can do all that eating and gaining without ever becoming fat: they’re the most efficient animals in converting food to body mass.

What’s on the GPO menu? Crustaceans (with Dungeness crabs as a particular favorite); mollusks such as clams, squid (and even other species of octopus, yikes!); and fish. In the wild, their rocky dens can often be recognized by the piles of discarded shells just outside the entrances.

Their large size notwithstanding, GPOs can fit through surprisingly small spaces. That’s because the hardest parts of their bodies, their beaks, are quite small. If their beaks will pass through, the rest of their bodies can as well. It’s possible for a fully grown GPO to fit through a hole the size of a lemon! 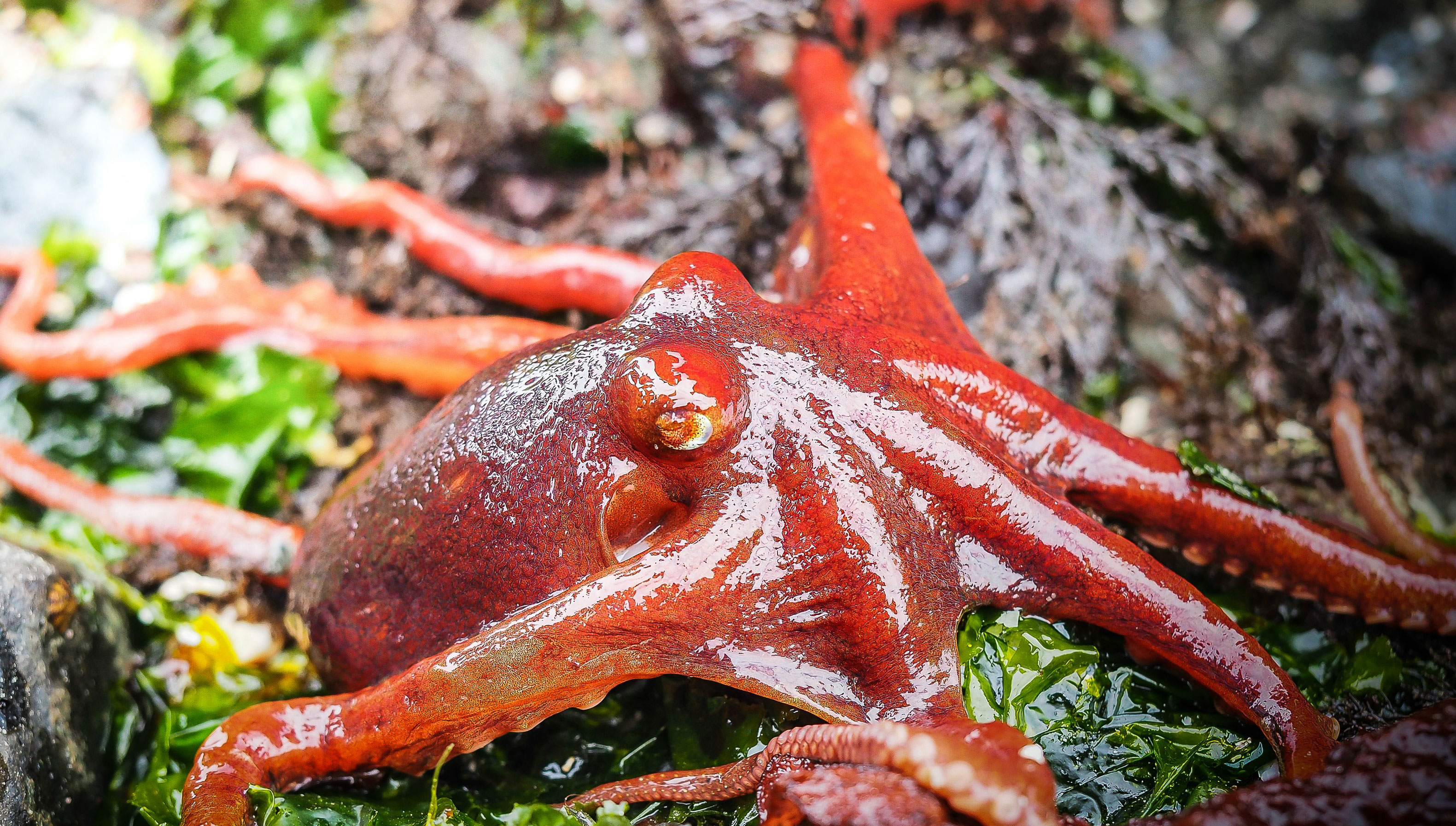 Red octopuses are another species under our care at the Seattle Aquarium. And, unlike GPOs, their name is a bit misleading: They range in color from solid yellow, brown or red to a variety of mottled colors with white spots—but their ink is reddish or red-brown.

It can be difficult to tell the difference between a young red octopus and a young giant Pacific octopus. But here’s how you can be sure: check the eyes. Red octopuses have three tiny flaps, or “eyelashes,” below each eye; giant Pacific octopuses don’t. And, once they’re mature, they’re no mistaking who’s who: red octopuses are much smaller than GPOs, coming in at about 20” long, including arms, and weighing less than two pounds. Red octopuses are also less discriminating about their food than GPOs: they're generalist predators, which means they basically eat whatever they can catch near where they live.

Think you’ve spotted an octopus in a rock crevice or beneath a cluster of seaweed on the beach during low tide? Don’t touch it! There’s a good chance it’s a red octopus, and these animals can and will bite, with painful local effects that can last for days.

Here’s another beloved species in our care at the Aquarium! These animals are sometimes called “the chameleons of the sea” for their ability to change their color—and even their pattern and texture—in the blink of an eye (check it out in the video above!). They do this to communicate with other cuttlefishes, camouflage themselves and warn off potential predators.

The cuttlefish gets its name from its cuttlebone—an internal, porous structure that helps the animal regulate its buoyancy. The cuttlefish can control that buoyancy by changing the gas-to-liquid ratio via a specialized tube called the ventral siphuncle. Cuttlefishes are unique in that no other cephalopods have cuttlebones.

Like GPOs, dwarf cuttlefish are a better match for their names: they’re about the size of a pea when they hatch, and grow to approximately three to four inches long.

Cuttlefishes prey on shrimp, crabs and fish, relying on their camouflaging ability to sneak up on their desired meal. If the prey is partially hidden by sand, cuttlefishes can squirt out a jet of water to uncover it. Then they quickly open their eight arms, shoot out two long feeding tentacles to grab the prey, and pull it toward their sharp beaks.

Ready for a true inside glimpse of a cephalopod? Check out our squid dissection video!