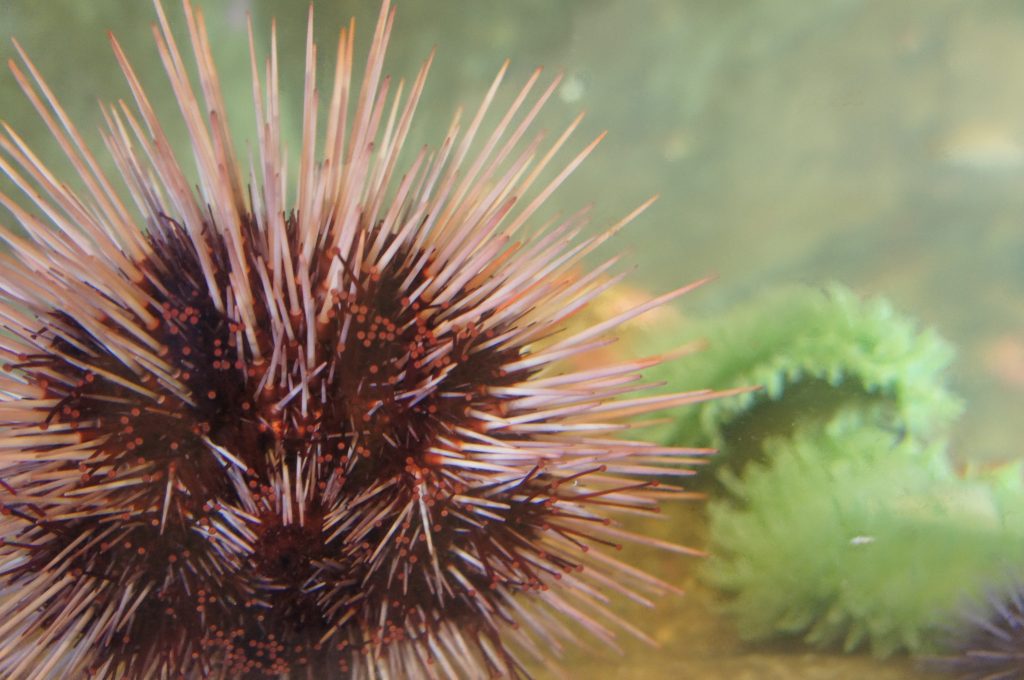 It’s no surprise that these colorful echinoderms are also known as the hedgehogs of the sea: they’re round like balls and covered with long, movable spines. They’re also one of the most popular animals in the touch pools of our Life on the Edge exhibit. Read more about them on our website, plan a visit to the Aquarium to touch one for yourself, and learn a few more tantalizing urchin tidbits with this blog post!

True or false? Most sea urchins are venomous.

False. Most species of sea urchins have spines that are solid and do not contain venom. Some members of the families Echinothuridae and Diadematidae have sharp, hollow spines with a venom gland. Also, there are flower urchins in the genus Toxopneustus that have venomous pedicellariae. The banded sea urchin, Echinothrix calamaris, in display in our Pacific Coral Reef exhibit, belongs to family Diadematidae, and is venomous.

Which of the three species of sea urchins on display in our tide pools are commercially harvested in Washington?

Washington Department of Fish and Wildlife regulates the harvest of both green and red urchins in Washington waters. According to records, 23,798 pounds of green urchin were harvested from central and south Puget Sound in the 2016–2017 season, which is now closed. The largest harvest from last season was 170,904 pounds of red urchin harvested from the San Juan Island zones.

And which local species are NOT on display?

The white sea urchin, strongylocentrotus pallidus and the heart urchin, Brisaster latifrons. Heart urchins are the most common urchin found in Puget Sound sediment monitoring. These odd-shaped urchins are deposit feeders and have tiny pincers on the end of their pedicillariae (small, wrench-shaped appendages).

Did you know? Sea urchins sometimes cover themselves in rocks.

Why do they do this? Ask one of our knowledgeable interpreters during your next visit to the Seattle Aquarium!