Masks are highly recommended for all visitors. View health and safety information.

Guest blogger Amy Olsen began her time at the Seattle Aquarium as a volunteer diver in the Underwater Dome habitat. She is now a laboratory specialist/research technician in the Conservation Programs and Partnerships department. Her Master in Marine Affairs program is in the School of Marine and Environmental Affairs at the University of Washington. Amy in Hawaii during a research trip.

Coral reefs are subject to marine heatwaves caused by human-induced climate change. Long-term thermal stress can negatively affect corals and the associated marine organisms that use these areas as critical habitat by causing coral bleaching. Coral reefs provide important ecosystem goods and services such as fisheries and tourism as well as aesthetic and cultural value. Healthy coral reefs have been estimated to add $477 million annually to Hawaiʻi’s economy through tourism and subsistence, recreational and commercial fisheries (Cesar & van Beukering, 2004).

For my master’s thesis project, I examined coral reef resilience to climate change by analyzing changes in fish assemblages (i.e., which species exist in the same area at the same time) after a marine heatwave. I analyzed 11 years of subtidal video survey data in three areas in West Hawaiʻi, capturing a marine heatwave event from 2014 to 2016. Fish were counted and identified to species, then assigned to one of seven functional groups: predators, secondary consumers, planktivores, corallivores and three herbivore groups—scrapers, grazers and browsers.

The dataset I used was collected by my supervisor, Dr. Shawn Larson, curator of conservation research at the Seattle Aquarium. This work falls under climate resilience, one of our three organization-wide conservation priorities along with sustainable seas and clean waters. A diverse fish community with species from every functional group may have higher resilience to disturbances, such as marine heatwaves.

The Seattle Aquarium has been conducting video-based reef monitoring surveys every year in Hawaiʻi since 2009. The goals of this monitoring project are the following:

I used statistical tests to evaluate how the fish communities changed after the marine heatwave. All three areas in West Hawaiʻi were found to be different in the years after the heatwave. Interestingly, regardless of how differently these areas are managed or how different the habitat is, all three communities became more similar to each other.

This has been previously described in the literature where climate changes in the marine environment favor small, generalist, algae-eating fish that are able to adapt to these changes. This is called biotic homogenization and has been cited as a pressing global biodiversity crisis (Dornelas et al., 2014, Magurran et al., 2015, McGill et al., 2015).

Kona, the Marine Life Conservation District with the highest level of fishing protection among our sites, showed the highest total fish abundance and least variation over time in abundance over the study period, suggesting ecosystem stability. These sites had the highest diversity values and also documented the highest coral loss. While the fish assemblage was significantly different after the marine heatwave, the observation that fish abundance remained high could indicate this area has higher resilience than the other two areas, and may suggest more stability to new or unusual environmental conditions (Bernhardt & Leslie 2013). 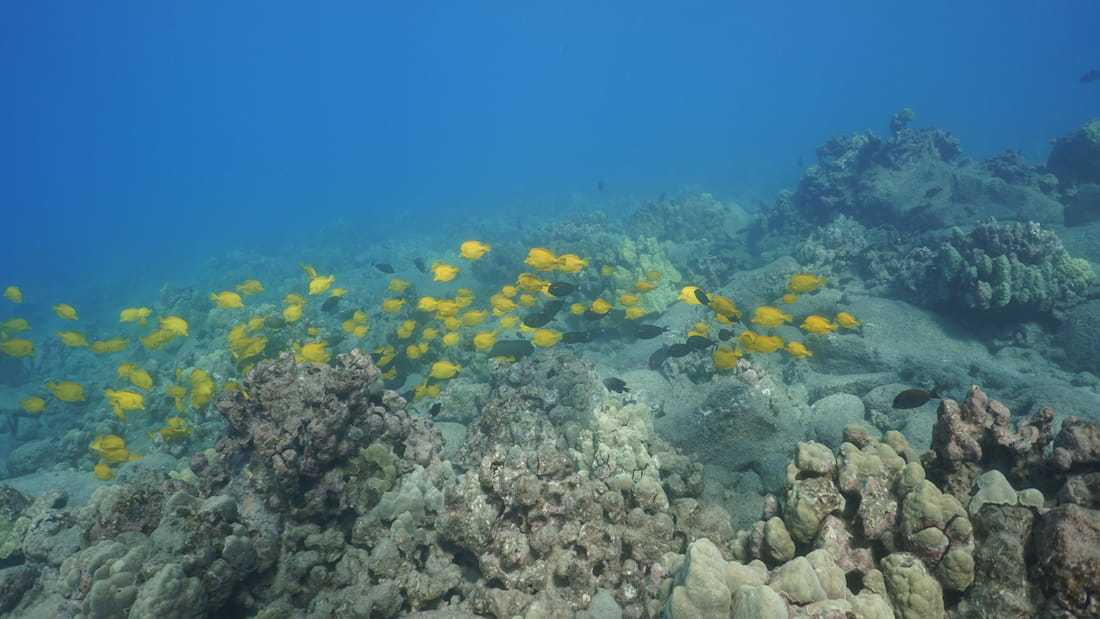 A group of yellow tang and orange shoulder tang at one of the survey sites in Hawaiʻi.

Marine protected areas can be an effective management strategy to prevent overfishing, protect diverse species and provide a refuge for life stages that are more sensitive, but they do not prevent warming of the ocean surface or coral bleaching. However, management policies that prevent overfishing of herbivorous fish, such as browsers or scrapers, can prevent phase shifts from healthy coral reef systems to algal-dominated systems which has been found to aid reef resilience (Hughes et al., 2003). 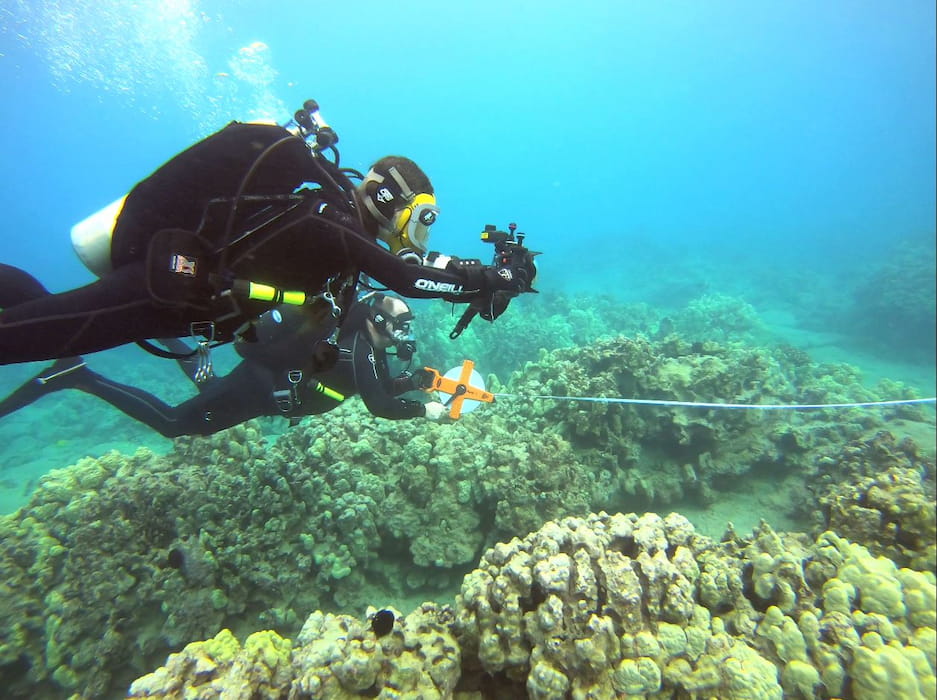 Understanding how marine heatwaves impact coral reef communities can guide decision-making for effective coastal management. Continued long-term monitoring is necessary to evaluate disturbance impacts on the coral reef ecosystem, as we anticipate climate change and marine heatwaves will continue into the future.

Take action! To help protect coral reefs from these stressors, the Seattle Aquarium is supporting policies such as the Restoring Resilient Reefs Act (S.46 and H.R.160). This act would provide new federal grants to support state coral reef management and restoration and respond to coral reef emergencies and disasters. You can help! Visit this Aquarium Conservation Partnership quick action page to encourage your members of Congress to co-sponsor this bipartisan legislation.