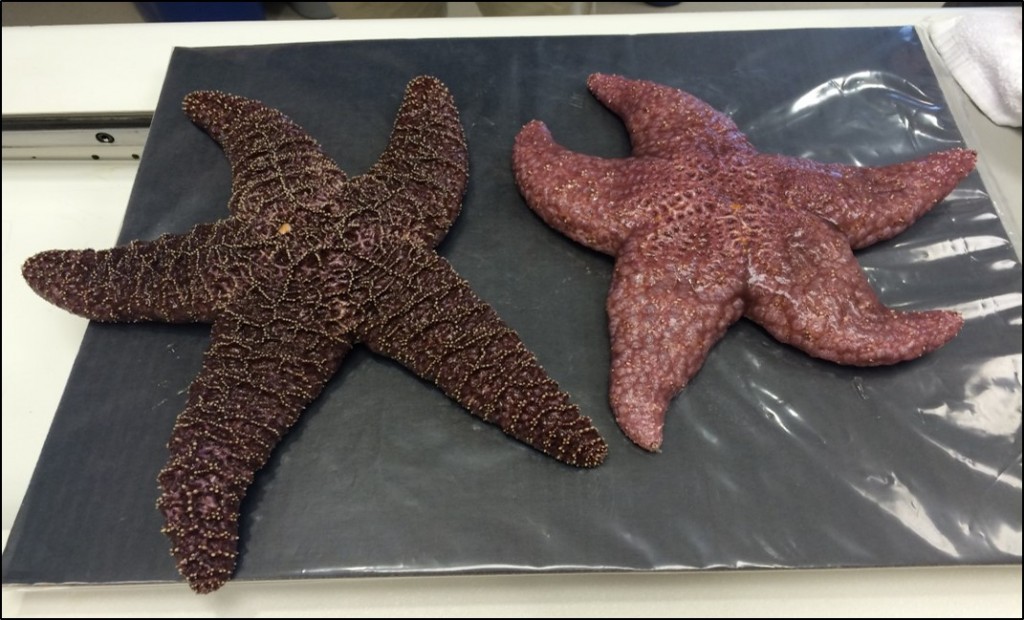 In late 2013, millions of sea stars began dying along the entire west coast of North America and in Puget Sound—even along the Seattle waterfront, directly under the Aquarium’s pier. The condition, soon labeled sea star wasting disease (SSWD), caused the animals to waste away, giving the impression of “melting.” Below, Seattle Aquarium staff veterinarian Dr. Lesanna Lahner shares an update on the collaborative effort to understand the disease.

Sea star wasting disease continues to be a problem for sea stars along the west coast of North America. Since it was first observed two years ago, many strides have been made in understanding the disease including the isolation of a virus, termed sea star-associated densovirus SSaDV, that may be associated with it. More work is being done to understand the role this virus might play in the disease process and the Seattle Aquarium is collaborating with Dr. Ian Hewson from Cornell on this topic.

Other research directed at better understanding SSWD has been done recently at the Seattle Aquarium, with generous support from The Boeing Company. This past summer, three interns worked with me on a variety of sea-star-related projects including 1) the effects of ocean acidification conditions on the general health of sea stars and on SSWD progression; 2) better understanding the coelomic fluid of healthy and diseased sea stars; and 3) radiographic evaluations of healthy and SSWD-affected stars. Evaluating coelomic fluid is like doing blood work on a mammal. It tells us a lot about what is going on inside the sea star on a physiologic level. The radiographic studies included fascinating diagnostics like plain film radiographs (x-rays), computed tomography (CT scan), and magnetic resonance imaging (MRI) of both healthy and diseased sea stars. These radiographic studies gave us new insight into what’s normal for sea stars and what’s happening in live stars affected with sea star wasting disease. These valuable coelomic fluid and radiographic studies were made possible due to generous support from collaborators including Dr. Nicole Stacy at The University of Florida School of Veterinary Medicine and Dr. Tori McKlveen at the VCA Specialty Clinic of Seattle.

The Seattle Aquarium recently co-funded a dive survey of the San Juan Islands with the SeaDoc Society and Reef Environmental Education Foundation (REEF) to look at the population impacts of SSWD. Over 100 dives were done as part of this survey by highly trained scientific divers. Before SSWD, between 20 and 30 sunflower sea stars would be seen on a single dive. Unfortunately, the findings were quite grim and not a single sunflower sea star could be found. Other areas are reporting very low numbers of sea stars and increasing numbers of urchins. The recruitment of young sea stars in most regions has been reported as low by collaborators.

The Seattle Aquarium continues to collaborate with many other institutions on SSWD research and is dedicated to understanding SSWD for the conservation of our marine environment. We will be hosting an international workshop in January of 2016 of sea star disease researchers to identify priorities for SSWD research moving forward. Stay tuned for more updates!