Can you guess what I am? I look like I have a crew-cut on my head, but  some of my relatives are much more heavily decorated. I like to hang out in empty barnacle shells or under rocks, and am often located in tide pools. I can grow to about 6 inches long and may be found inside empty giant barnacle shells, old bottles, and under rocks. You can find me in the Aquarium in the Puget Sound Fish exhibit and in a Life on the Edge pool. My relatives are sea stars, basket stars, and more distantly, sea urchins, sand dollars and sea cucumbers. Usually all that you see of me are my flexible arms, since my central disk is usually hidden under or behind rocks. I catch food particles in the water and move around quite well with these long arms. 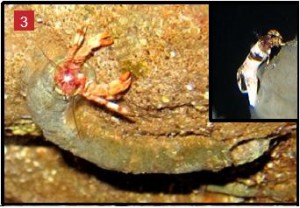 I’m the traveling male of the female below. At less than 1cm long, I’m hard to see even though the piece of tubeworm shell I travel in is white. The females I seek are about my size, but can’t move like me; they live in curving tubeworm shells stuck to a rock or other hard spots. Look for me in the Puget Sound Fish exhibit. 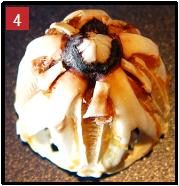 No, I’m not an animal, but was once part of one. I am named after an ancient Greek philosopher. I have 5 “teeth” that would have opened and closed to chew up pieces of kelp and sometimes other things such as bits of fish.