The morning sun star (Solaster dawsoni) eats its own kind. It can swallow small prey whole, but will evert its large stomach to feed on larger sea stars. So, how does it capture and hold onto sea stars that may be larger than itself? Special spines assist the tube feet to latch securely onto its prey; it may spend 4-8 days on top of a sea star (that may be moving) as it absorbs its body.

A morning sun star can move up to 12 cm per minute; contrast this with the 160 cm per minute that a large sunflower sea star (Pycnopodia helianthoides) can do.

Its cannibalistic habits may actually benefit some sea cucumbers that are preyed upon heavily by other sea stars such as the striped sun star (Solaster stimsoni).

How does a sea star keep from becoming a meal for the morning sun star? Here are some strategies that some stars use when touched or sensing this predator: 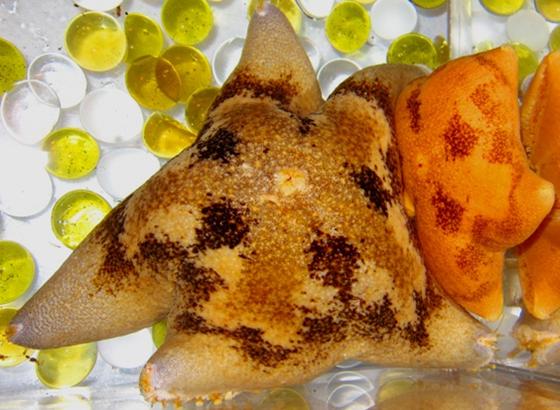 When touched the slime star will rapidly secrete, from a membrane just under the skin, a protective coating of copious amounts of noxious slime. The thick layer prevents the predator’s tube feet from sticking on it and it also seems to contain a repellant chemical that makes the attacker quickly release any tentative hold.

This slime is so potent that it can even protect other prey animals that are coated with it.

Come take a closer look at some of these sea stars at the "Closer Look Table" in the Life on the Edge exhibit at the Aquarium.