Get ready for Octopus Week at the Seattle Aquarium!

In anticipation of Octopus Week, February 18–26, as well as our Octopus Blind Date on February 14 (Valentine’s Day!), we asked Senior Aquarist Kathryn Kegel to answer a few questions for us. 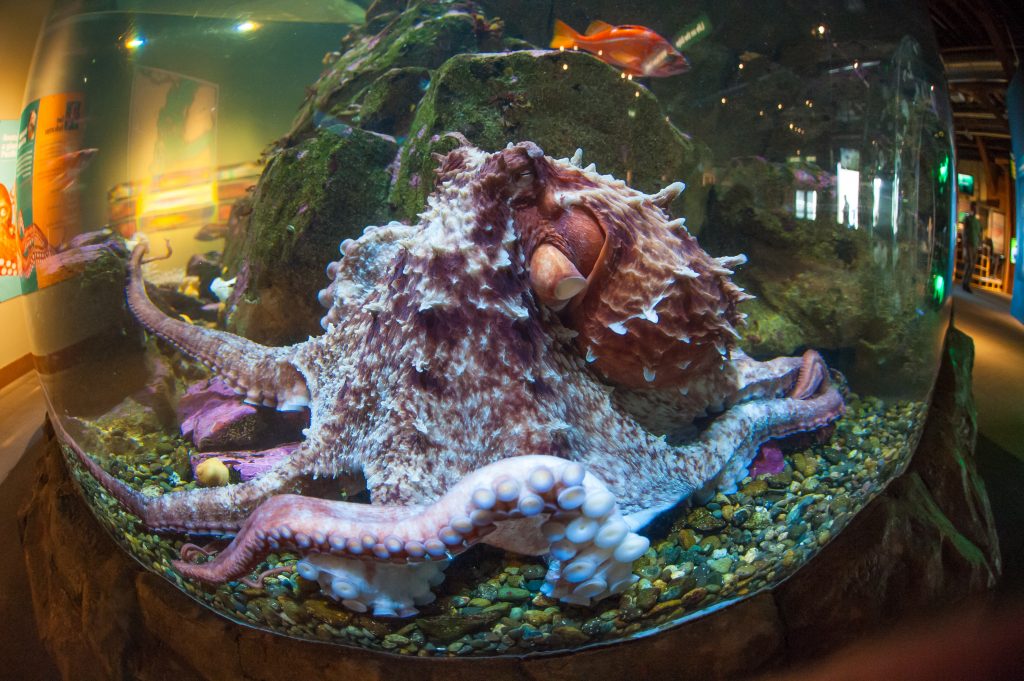 Q: Where do the Aquarium’s giant Pacific octopuses come from?

A: We collect our octopuses locally right here in the Puget Sound. We are lucky to be located in the heart of their natural habitat, which is important for us because it means we get to release the octopuses back to where we collected them.

A: We generally keep our octopuses anywhere from six months to a year, then release them back to the Sound. Octopuses are what we call terminal maters, meaning they die after mating. Octopuses only live three to five years, mating only at the end of their lives. We feel it’s important to be able to release them back to wild to allow them to complete their life cycle.

Q: What goes into preparing an octopus for release?

A: There is a lot of preparation that goes into an octopus release and the whole Octopus Week! We actually start planning for this event in September. We meet once a month to check on the progress of planning for the releases, visitor activities and the animals, making sure we are on schedule for the event in February. During the month of January we start rehearsing for the releases as well as some of the other events happening during Octopus Week. We begin with a tech rehearsal to make sure all equipment, lights, camera and communication cables are working properly. Then we will do a “wet” rehearsal, which basically means we do the full release without an actual animal. A release takes about 20 people to pull off, with five divers in the water and about 15 top-side support staff and interpreters. Once we have practiced all the steps a couple of times we are ready to go for Octopus Week.

Q: What happens after the octopus is released?

A: We don’t really know. During Octopus Week, when we release an octopus live for our guest at the Aquarium, we follow the octopus for about 20 minutes, but after that we just don’t know. They most likely move to an area with good food and a den space. After mating, females find a good den space to lay their eggs, and guard them until they hatch—shortly after the hatch, the females die. Males continue to move around, looking for another female to mate with, then die.

Q: Can you describe a day in the life of caring for an octopus?

A: We start our day at 7am, beginning with an initial check of each animal and their life support systems. Once we’ve verified everything is working normally, we come up with an exhibit cleaning plan that includes all the exhibits in the area. We work on cleaning exhibits until the Aquarium opens, then we move on to food prep and care of our animals behind the scenes.

Our octopuses on display are fed twice a day by the interpretation staff so our visitors can learn more about these cool animals. The interpretation staff records every feeding, making notes on how the animal responded and how much food they ate. This allows us to make changes as needed to the menu for the health of the animal. After the Aquarium closes, we have a night biologist who continues to do rounds checking on our animals and their life supports system until we come back the next day and start all over again.

Q: How many people at the Aquarium care for your octopuses?

A: Our octopuses are cared for by all six members of the Aquarium’s cold-water fish and invertebrate team.

Q: What might people be surprised to find out about giant Pacific octopuses?

A: Every octopus we care for here at the Aquarium has a slightly different personality. Some are more active and curious, others more laid back and mellow.