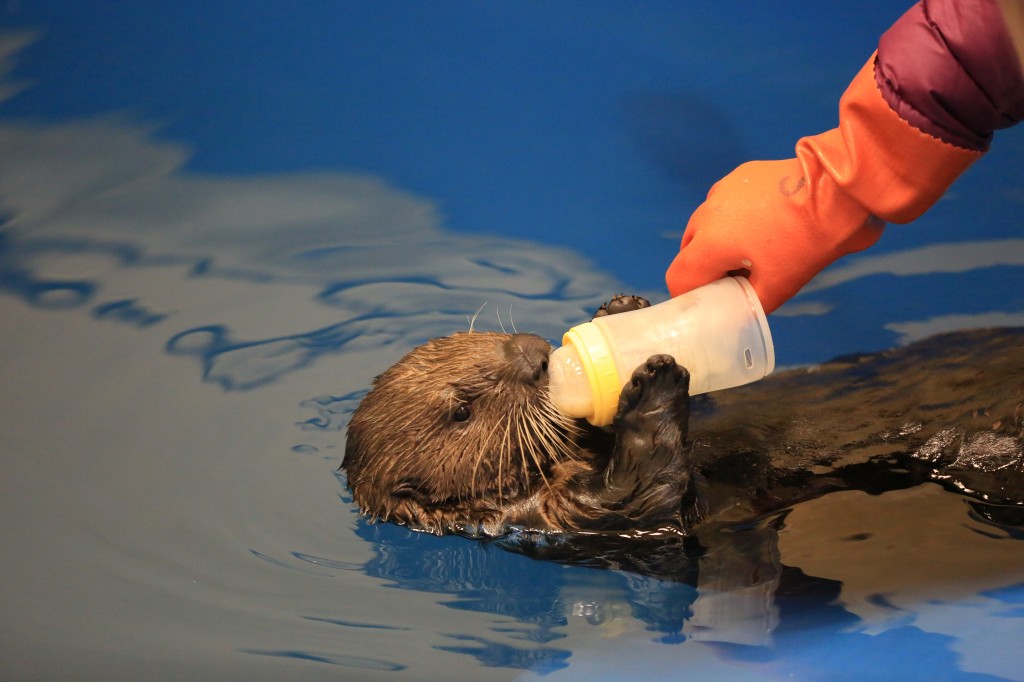 Great news! Mishka, a rescued Alaskan sea otter pup, will soon be making her home at the Seattle Aquarium. She’ll be arriving very early tomorrow morning and it’s expected that Aquarium visitors will be able to view her on Sunday, February 1—making Super Bowl Sunday even more super!

Mishka, which is Russian for “little bear,” is just over six months old and is coming to the Aquarium by way of the Alaska SeaLife Center in Seward, Alaska. After being caught in a fishing net in July 2014, she was rescued, rehabilitated at the Alaska SeaLife Center, and deemed non-releasable by the U.S. Fish & Wildlife Service (USFWS). Her caretakers in Alaska report that she’s been enjoying a diet of surf clams, crab, mussels, capelin, squid, herring and pollock and now weighs just over 26 pounds. They also say that she seems to have a lot of fun with enrichment activities, particularly piles of ice.

Because Mishka has been living indoors, Aquarium staff will be systematically acclimating her to her new outdoor environment. After she arrives on Saturday, she’ll be placed in the Aquarium’s sea otter holding pool, where the windows will be covered and stanchions will be used to keep visitors out of the area. Based on Mishka’s behavior, the window coverings will be gradually removed in sections. Over the following few days, the stanchions will be moved closer to the windows until she gets used to people being close. In time, as she becomes comfortable in her new surroundings, we will introduce Aniak as her first companion.

Northern sea otters have made their homes at the Aquarium since we opened in 1977. In fact, we have the distinction of being the first zoo or aquarium to have a sea otter pup conceived, born and survive into adulthood. Multiple populations of sea otters are listed as threatened under the Endangered Species Act—northern sea otters are threatened. As accredited members of the Association of Zoos & Aquariums (AZA), the Aquarium and Alaska SeaLife Center are working collaboratively to place sea otters that have been deemed non-releasable by the USFWS. Initiatives like this help further our goals related to conservation research and education about this species.

Check out our fact sheet to learn more about northern sea otters—and come meet Mishka on your next visit!