Know your beach-this week from the beach 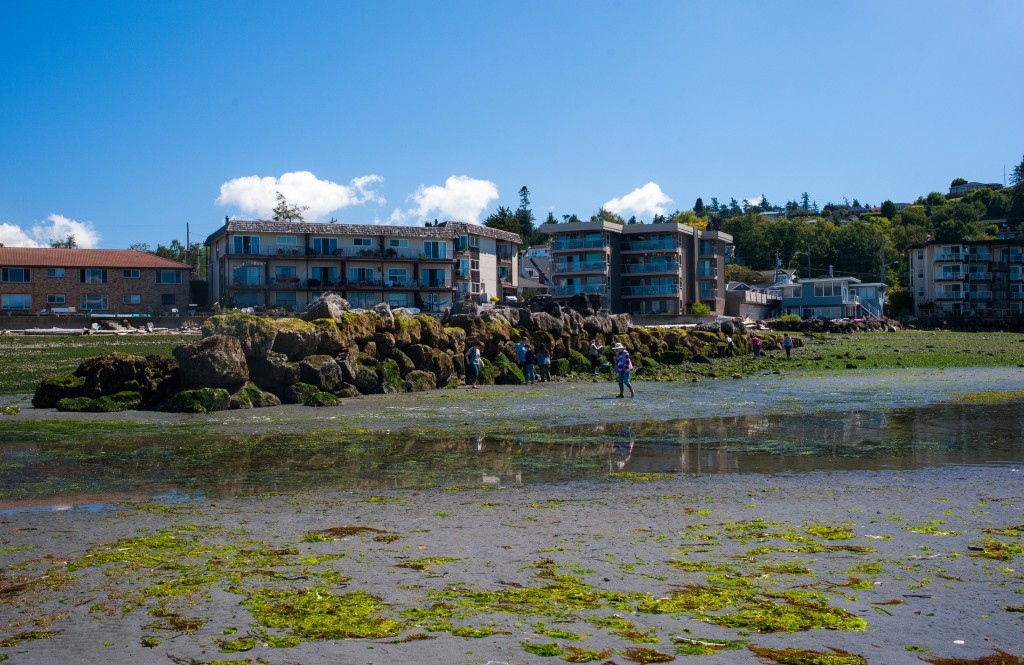 Here it is, my first official day as a beach naturalist, and I am a little nervous. I have been through lots of training at the Aquarium, I have had days out on the beach learning to identify things, but now it becomes official—I get to put on the red hat and a vest with a ton of pockets! My first shift was at Constellation Park or, as we call it, South Alki. Which is kind of awesome for me since I live down the street. It was a beautiful sunny day and a cool breeze was in the air. It was going to be a short shift and not a very low tide (-1.28), but it was my front yard and I knew where all the creatures like to hide. I slid on my wellies and headed down to meet the rest of my Beach Naturalist team. We got signed in and grabbed our conversation counters. My nervousness kicked in again—what if I don't have as many conversations as the other volunteers? The team was great and we were laughing and excited to get out on the beach. I headed out to the large boulder wall, where I knew I would find lots of creatures. I poked my head into the larger openings and cracks between the boulders. The sun was peeking through the gaps in the rocks and I came across this great little scene—a sunbeam coming through a gap in the rock, revealing a hidden little world for sea stars and anemones. At the boulder wall I found lots of purple sea stars, and some of the largest anemones I have seen yet. There was so much life on and in between these rocks. I came across an old leather boot that had become home to a couple thatched barnacles. Above the boot I found a brilliant orange sea star hanging out (literally) with a group of purple stars. The boot became my marker to show people the vibrant colors of our local sea stars. Beachgoers were starting to show up and it was time to earn my red hat. I was a little nervous with the first few people, but I realized that the people coming out were just as excited as I was to find and learn more about the many creatures that live just off the shore. I got to have great and comical conversations about the saggy-baggy-anemones hanging out, just waiting for the tide to come back in. I got to show people a colony of aggregating anemones and explain how they split and clone themselves—we even had one starting to split. I got to have so many great conversations with people. I was a beach naturalist! From the boulder wall I moved out to some smaller rock outcroppings. I met a family that had two of the most excited little explorers. We hunted for creatures and found the largest purple sea star I have ever seen. The two sisters were ecstatic. "STARFISH!" they exclaimed to everyone in earshot! I think they were doing a better job getting people over to see it than I was. It was really great to kneel with them and talk about sea stars. They knew so many facts that I was impressed, and I totally had to step up my game. We went on the hunt again and found a mottled sea star and lots of sea cucumbers. The interaction with these two little sisters and their parents really helped me understand why what we do as beach naturalists is so important. We are helping people learn about the waters that are around us and how important each creature is in the food chain from the smallest nudibranch to the salmon and orcas. Before I knew it the tide was coming back in and I had enjoyed 26 conversations with people on everything from iridescent red algae to ocean acidification. It was a great first shift and I am ready for more. Bobby is new to the Beach Naturalist program, joining after encouragement from a co-worker who is a seasoned volunteer.

His passion for the Salish Sea started when he and his wife moved to Seattle three years ago from San Antonio, Texas.

Bobby is an avid photographer and enjoys capturing his adventures of the Pacific Northwest. During the week you will find him biking to work where he leads a creative team at a local marketing agency.

Your gift will support the Seattle Aquarium’s 2020 Resilience Fund and our continued service to the community despite our current, temporary closure in addition to 16 weeks of closure last spring. Our programming continues with your help.

Through the end of the year, longtime supporters Stuart and Lee Rolfe will double every gift made to the Resilience Fund up to $500,000! This is an incredible opportunity to make your support of the Seattle Aquarium go even further.