THE BACKSTORY: WHERE DID THEY COME FROM?

We’re honored to provide a home to Leu and Flaherty, two of just 10 northern fur seals living in zoos and aquariums in the United States. Leu was rescued in May 2012 after being found stranded under a kelp bed on a California beach; his estimated age at that time was 11 months. Poor Leu was emaciated and missing patches of his guard hairs—and it was soon determined that he was blind in his right eye. He was deemed non-releasable and went to live at the New England Aquarium until early 2015, when he moved to the Seattle Aquarium. Flaherty was born at the New England Aquarium in 2012 and spent his early years there until joining the Seattle Aquarium in 2015.

These moves weren’t for just changes of scenery: they served (and continue to serve) an important purpose. In 2009, with the hope of increasing the population of northern fur seals in zoos and aquariums, the Seattle Aquarium collaborated with the New York Aquarium and the Mystic Aquarium in Connecticut to move the animals with the highest breeding potential to the New England Aquarium. The Seattle Aquarium sent Isaac, a male who was 10 years old at that time—and was also the last northern fur seal to be born at the Seattle Aquarium (more on that shortly). Isaac fathered a male pup in 2012 and a female pup in 2013. Any guesses as to who that male pup was? (Spoiler alert: It was our own Flaherty!)

THE ROAD TO A FOREVER HOME AT THE AQUARIUM

It’s a question we hear often: how did Leu, Flaherty and the other marine mammals in our care come to be living at the Aquarium? And why can’t they live in the wild instead? Put very simply, every marine mammal—and bird!—in our care was either born in a zoo or aquarium (like Flaherty), or stranded/rescued and deemed non-releasable by the U.S. Fish and Wildlife Service or the National Marine Fisheries Service (animals with this status either have a disability, like Leu, or were stranded too young to be able to survive in the wild). The Association of Zoos and Aquariums (AZA) oversees species survival plans (SSPs) which coordinate collaborative breeding programs. The Seattle Aquarium was first accredited by the AZA in 1979 and, like all members, must undergo careful review to renew that accreditation every five years.

BIOLOGY AND THE OPEN SEA

Fast fact: Did you know a mature male northern fur seal can weigh over 600 pounds? That’s a lot heavier than Flaherty and Leu (who recently weighed in at 207 pounds). At maturity, male northern fur seals weigh between 350 and 600 pounds, depending on the season. Mature females, on the other hand, are much smaller, averaging between 95 and 110 pounds. Which means that an adult male fur seal can be up to six times larger than an adult female! Sexual dimorphism is the term for size difference between males and females—and the sexual dimorphism between male and female fur seals is the largest of any marine mammal species. 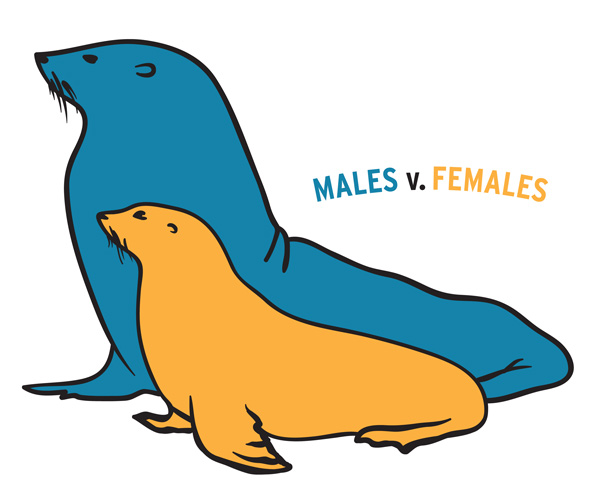 Fast fact: In the wild, northern fur seals are pelagic—which means that, unless they’re on land for the breeding season, they spend most of their lives in the open ocean. Northern fur seals have some adaptations that help them survive and thrive while living primarily in the water: they’re distinguished by their big eyes, which help them see at night; the large flippers that propel them through open water; and, maybe most notably, their thick, luxuriant fur. That fur made them especially attractive to hunters for many years. As a result, northern fur seals are listed as “depleted” under the Marine Mammal Protection Act. Their total population, estimated at 1.1 million in 2016, is far less than it used to be—and their numbers are declining.

CONSERVATION EFFORTS—IN THE WILD AND UNDER HUMAN CARE

What’s the reason behind the population decline? That’s a question that’s been on many researchers’ minds, and it’s not easily answered. Field research on northern fur seals is no easy task since the animals breed in the summer on remote islands in the North Pacific and are otherwise in the open ocean. As it happens, more than 50 percent of the wild northern fur seal population breeds on the Pribilof Islands in Alaska—so it’s there that researchers have focused their efforts. Stay tuned later this week when our own Associate Curator of Birds and Mammals Julie Carpenter chats with Jeremy Sterling from NOAA Fisheries/Alaska Fisheries Science Center about efforts to conserve northern fur seals in the wild!

As we said at the top of this blog post, northern fur seals in zoos and aquariums are a rarity as well, and we at the Seattle Aquarium are proud to have a long history with them. We’re one of just three facilities in the United States—and the only one on the West Coast—to have them in our care. In 1983, we became the first zoo/aquarium in the world to have a northern fur seal conceived and born in human care, and a total of five fur seals born here lived to adulthood, including Isaac (Flaherty’s dad). When Flaherty came to live with us in 2015, it was like a fur seal full circle! Check back on Thursday when we'll feature a post about fur seal population management at AZA-accredited zoos and aquariums.

Please consider a gift that will help us continue providing the best care for all our
animals, support our staff, advance science-based policies to protect marine wildlife,
and expand our at-home engagement and learning opportunities during our temporary closure.