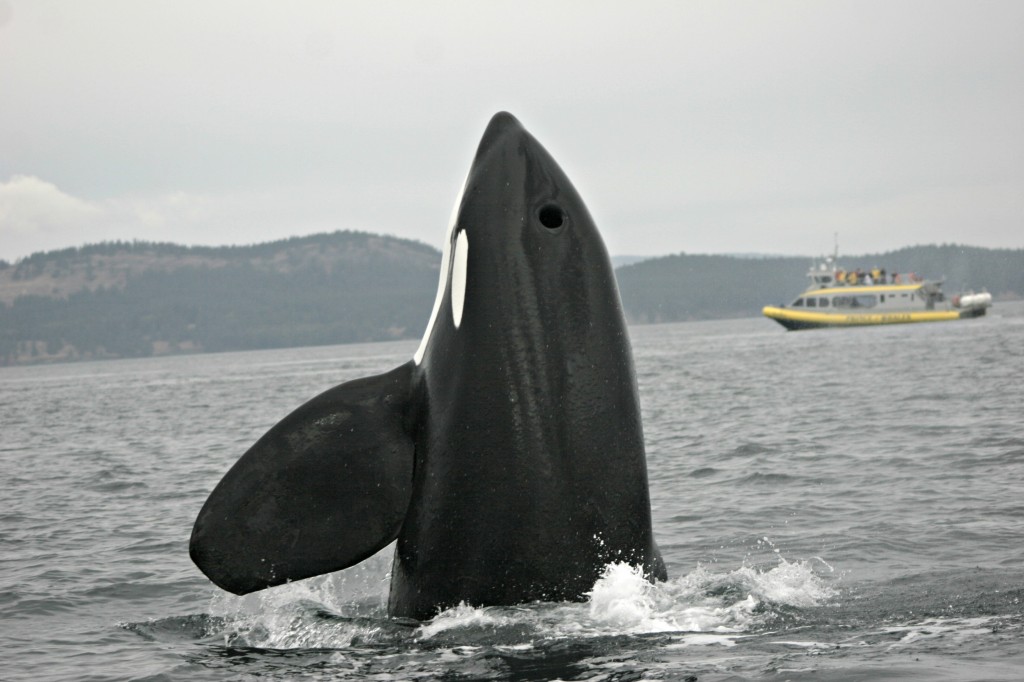 Seattle Aquarium Community Engagement Manager Darcie Larson recently had the opportunity to assist scientists from NOAA’s Northwest Fisheries Science Center with their research on the local endangered orca population, the Southern Resident killer whales, which consist of J, K and L pods. These whales are frequent visitors to the inland waters of the Pacific Northwest and are even sometimes seen in Elliott Bay, right in the “backyard” of the Seattle Aquarium. NOAA has identified three main threats to this population of approximately 85 whales: scarcity of food (salmon); high levels of contaminants from pollution; and disturbance from vessels and sound. During the summer, the Southern Resident pods can often be found around the San Juan islands, about 100 miles northwest of Seattle. In the fall and winter, the whales follow salmon runs into central and southern Puget Sound, bringing them close to Seattle. Researchers obtain a permit to follow the whales in a boat flying a yellow flag, allowing them to come much closer than the 200-yard minimum distance that other boaters are required to maintain. From the research boat the scientists collect a variety of information about the whales to determine if recovery efforts are helping or what other efforts should be made.

Assisting the researchers allowed Darcie to get a firsthand look at all the work that goes into studying these amazing animals, and share the experience and knowledge she gained with others through her work at the Seattle Aquarium. Learn about Darcie’s experience in this 3-part blog.

I arrived on beautiful San Juan Island after a car and ferry trip from Seattle, ready to go out as an assistant on the NOAA research boat for three days. The research boat was moored at the University of Washington’s Friday Harbor Labs, and we were ready to don our orange mustang suits and get out on the water! Unfortunately the whales had other ideas. This isn’t uncommon for wildlife researchers. You can plan for your field season and you may spend a lot of money on transportation, housing, fuel and dock space for the boat, but what happens if you don’t find the whales you’re looking for? That’s just part of wildlife research—it’s unpredictable. You definitely need to bring a lot of patience and, if possible, other work to do while you’re waiting!

My previous experience as a whale watch naturalist taught me that the public has developed a somewhat skewed view of wildlife after years of watching the Discovery Channel, National Geographic and the like. We expect the highlight reel, with whales breaching, tigers chasing down prey, sharks leaping out of the water and catching a seal midair. What we don’t see is the hours, days, weeks, months of waiting when no whales showed up, or the tigers were sleeping, or the sharks were nowhere to be found. However for researchers, this “null data” is actually very important. It’s just as important to know when the animal you’re studying is in the area as it is to know when it’s not.

You might be wondering, why not just go out on the boat and start looking for the whales? Sometimes researchers do, but here in the Salish Sea, there are many people who always have an eye out to the water—from naturalists who work on the whale watch boats, to ferry captains, private boaters and waterfront homeowners. There’s quite a large community of people who are essentially always looking for the whales. Word travels fast, and we were all certainly hoping to get word soon that the orcas were around! Some of the researchers in our crew had housing on the west side of San Juan Island where the whales are seen most often, so part of the drill every morning was waiting to hear if they’d spotted the whales from their back porch.

While we were waiting, we did work on our laptops and anxiously awaited word of any whale sightings.

To learn more about orcas, visit our Orcas in Puget Sound webpage and stay tuned for the next blog post in this 3-part blog series.

All photographs taken under federal research permits and except where noted are courtesy of NOAA.