Dr. Shawn Larson, the Aquarium’s curator of conservation research, was recently part of the team for the Southwest Alaska Network’s (SWAN) Nearshore Vital Signs monitoring program 10-day research trip. The eleven participating researchers were affiliated with the United States Geologic Survey (USGS), National Park Service (NPS), University of Alaska Fairbanks and the Seattle Aquarium. Below, she recaps highlights from the first half of the trip.

Travel day. Left Seattle at 6am for Anchorage, Alaska and then on to Homer where we met our boat for the trip, the Dreamcatcher. She is a 97-foot vessel with six staterooms, three crew rooms, a sitting room, a movie room and a large galley. She was originally designed to host oil exploration teams and has since shifted to hosting conservation research teams. The crew of four—Captain Rob, his wife Star, their friend Carol and their granddaughter, Lily—welcomed us. We loaded all the gear, went out to dinner and then headed out to the Katmai coast where we arrived in the early hours of the morning. First full day on the Katmai coast, which is southwest of Anchorage and on the Alaska Peninsula just east of the beginning of Alaska’s Aleutian Island chain. The weather was nice with sunny skies and a slight breeze; the temperature in the mid-‘60s. We were still on our way to our first survey sites but stopped and put the two zodiacs (inflatable boats) and work crews into the water and to land on the beaches of adjacent Islands to scan for beached sea otter carcasses to gather the skulls for age analysis and other studies.

This data informs researchers about the age structure of the mortalities, which is an indicator of the relative heath of the population. In a healthy population, the carcasses should be primarily the very young and the very old—which is normal. If there are many carcasses that are young- to middle-aged adults in the prime of their breeding years, this is a strong indication there is a problem with the population.

We also found some sea otter scat (poop) in the rocks and bushes well above the high tide mark, indicating that sea otters had rested or hauled out in these areas—which was surprising because some of these rocks were 20 feet above high tide level.

We also collected data on what the sea otters had been eating based on the shells in the scat, and found evidence that they had been eating clams, crabs, mussels and small fish like capelin or sand lances. Today we anchored in our first two survey sites in an area of the Katmai coast called Amilik Bay near a beautiful area called Geographic Harbor. We had six intertidal surveys to conduct: the rocky survey where all kelp and invertebrates are surveyed along a 100-meter tape; the soft survey where all invertebrates are surveyed in soft sediment along 100 meters (yes, this requires digging for clams in the sand); and the mussel survey where mussel densities along a 50-meter transect along the intertidal area are assessed.

In the afternoon after the tide came up, we conducted marine bird and mammal surveys along several kilometers of coastline, black oystercatcher surveys (called BLOYs), and looked for feeding sea otters to gather foraging data.

This was to be the pattern for the next seven days. Our goal for sea otter foraging in this area for the next couple days was to gather 30 foraging bouts—a bout being one sea otter foraging and documenting what it is eating for up to 20 consecutive dives. We count dive time, surface time, the prey being eaten, the number of prey and the size. This gives us an indication of how many calories the otter is consuming and expending during foraging. In this area saw most of the sea otters were eating clams. 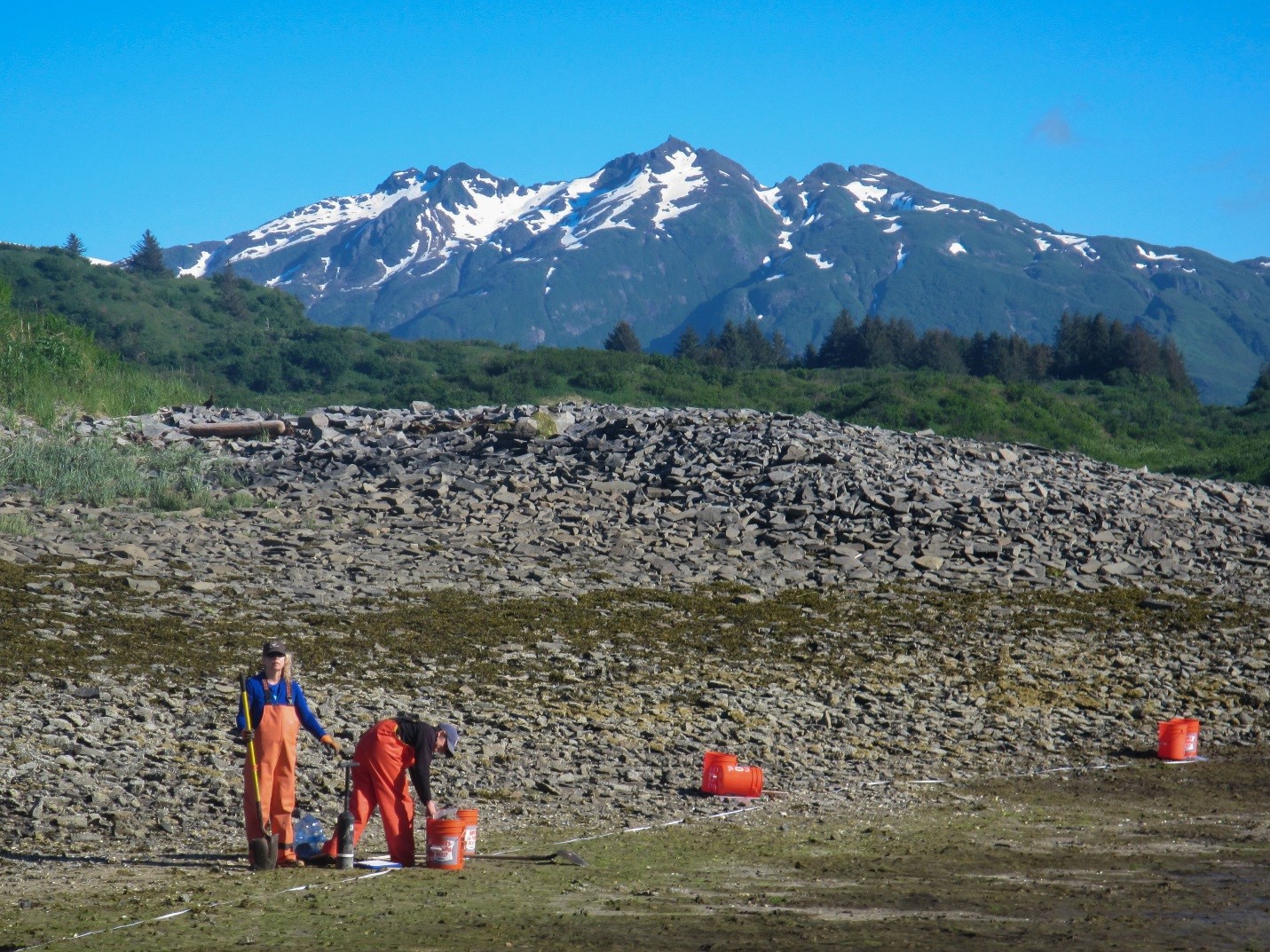 The work is intense, crawling around on slippery intertidal rocks and counting everything that’s alive—algae and invertebrates. It takes all morning.

The other crew was on a soft survey site and when we were all back to the boat, we found out that while digging clams they were visited by a coastal brown bear (aka grizzly) walking along the beach. The bears along this coast are very numerous and all crews saw bear signs but only a couple were visited by one up close. This bear, like many along this coast, was curious about the crew and what they were doing, and moved their survey tape and knocked over some of their buckets full of clams and sand. The crew stood quietly at one end of the beach watching with their rifle, bear spay and flares. The bear was just curious and didn’t bother them.

In the afternoon we landed on Mink Island and found a high spot to view sea otters, hoping for some foragers. The afternoon was bright and clear, the sun almost too bright for foraging operations but we did get a couple of bouts. Day three in Amalik Bay. Today it’s all about foraging otters. That’s all we have left to do here. We spent most of the day on Mink and Little Mink islands. We saw a mother bear and two cubs through our spotting scope over on Takli Island, just wandering the beaches with the cubs playing on the surf. We also saw lots of foraging otters and gathered a lot of data. It was a great day. Check back soon for part two of this story!