Follow along with Seattle Aquarium bird and mammal team members Mariko Bushcamp and Aubrey Theiss, who recently traveled to the Alaska SeaLife Center to assist with the rehabilitation of an orphaned sea otter pup! 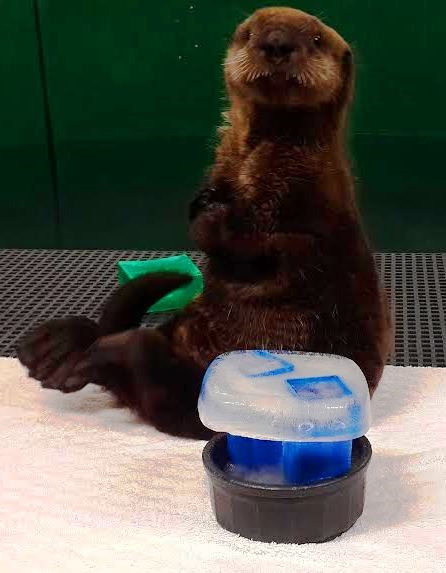 At about seven weeks and 11 pounds, Odiak was given access to a large pool to practice swimming. At this point he was already starting to lose his buoyant pup fur and could experiment with diving. After about three days he was able to dive to the bottom of the pool and retrieve a sunken toy! Although he often still needed assistance, he was beginning to groom himself—a huge milestone and relief for his busy caretakers.

As Odiak got older he became curious about everything and anything! Caretakers had to be creative in keeping him entertained so he was mentally/physically stimulated and stayed out of trouble. This can be quite challenging, as even a two-month-old sea otter pup has sharp destructive teeth. Sea otters are one of the few non-primate, tool-using mammals and have extremely dexterous paws. In the wild, they use these paws, along with tools (such as rocks), to locate and break open prey items. Caretakers strive to mimic these natural behaviors through the use of enrichment items to encourage independence and stimulation. Toys frozen into blocks of ice, as pictured, are a favorite of Odiak. Mariko found herself filling the freezer with endless possibilities of ice toy combinations to keep Odiak as entertained as possible. Much like a toddler!

It was also time to teach Odiak some manners so he could be prepared for living with other sea otters in a zoo or aquarium. Caretakers began to train basic useful behaviors, such as voluntary kenneling/weighing, asking him to go into the water, and stationing for meals. Before every feed, Aubrey asked Odiak to go into the water and station along the deck so he could get accustomed to eating like an adult sea otter. These are all behaviors that help the staff stay safe, as Odiak will be over 70 pounds one day! Desensitizing him to being inside of a kennel is particularly important so that caretakers can easily weigh and transport him.

Follow Odiak’s progress at the Alaska SeaLife Center at www.alaskasealife.org. And stay tuned for our upcoming blog series following Seattle Aquarium staff members assisting with the rehabilitation of Hardy, a rescued sea otter pup at the Vancouver Aquarium!