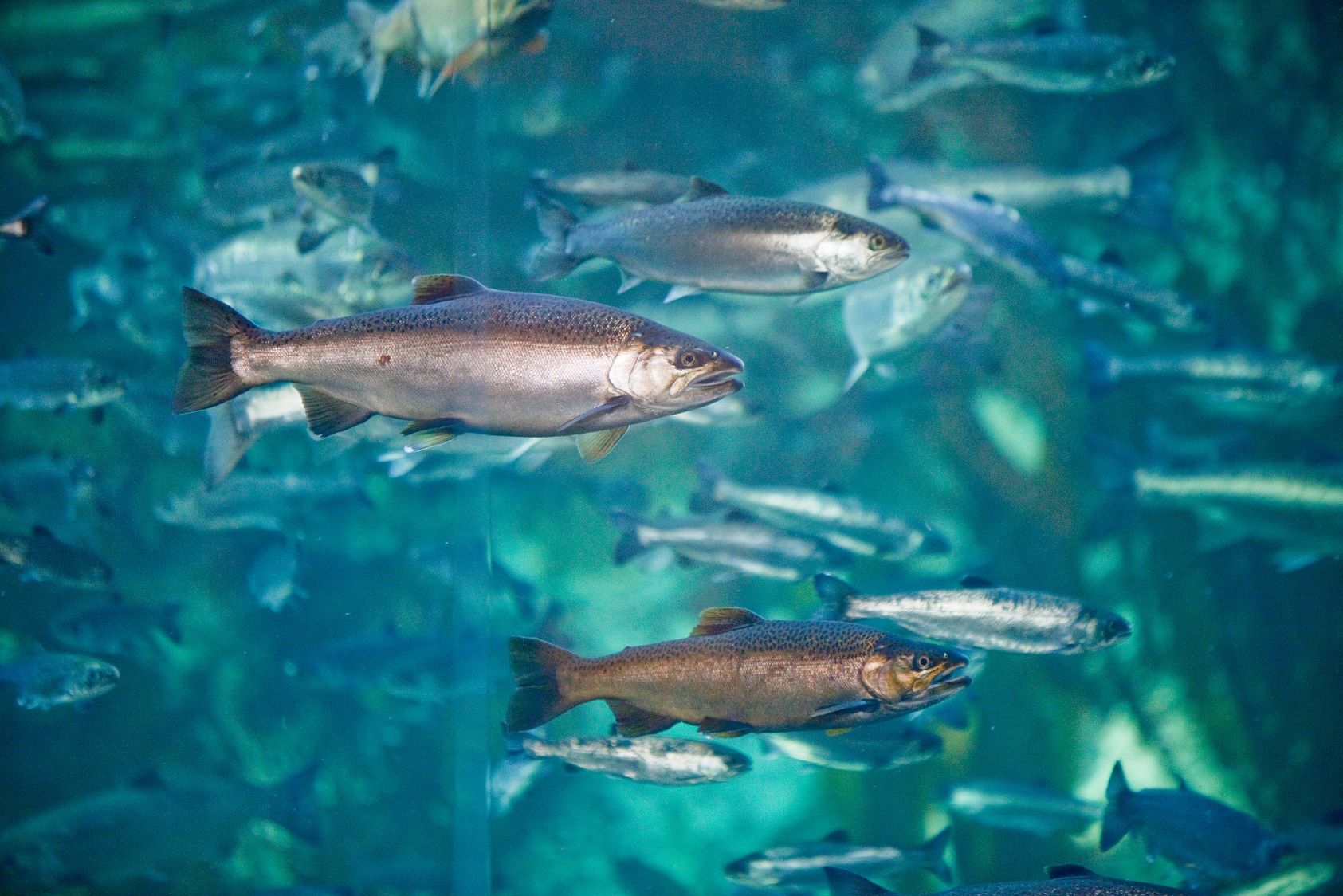 We simply can’t have a week of online engagement about Puget Sound fish without devoting some very special attention to one of the most culturally significant and iconic local species, critical to the overall health of our Pacific Northwest marine and terrestrial ecosystems: the salmon.

Many people know that the broad term “salmon” encompasses several different species. Seven of those are found here in the Pacific Northwest: Chinook (also known as king), coho, chum, pink, sockeye, steelhead and cutthroat. And, within our Pacific salmon and Pacific trout species in Washington state are a whopping 486 distinct populations—each one a scientifically designated, biologically distinct group of individuals (e.g., Snake River spring/summer Chinook; Skagit River coho) adapted to specific streams, estuaries and other conditions.

When people join us for the Cedar River Salmon Journey each October to see salmon spawn, they’re witnessing the journey of a specific group of salmon, through specific conditions that only the Cedar River provides. Because of varying conditions from river to river and from the river mouth to the headwaters, each salmon population has slightly different timing for their reproduction: when they’re in the open ocean and signaled to return, when they start to move upriver, and when their eggs hatch.

Salmon start their lives as juveniles in local streams, rivers and estuaries before heading out to the open ocean. Depending on their species and population, salmon may spend anywhere from six months to five years in the ocean. Some travel thousands of miles during this time. Environmental factors like the availability of food, water temperature, river flows (which influence dissolved oxygen), ocean acidification and pollution all play a role in long-term health of all salmon species.

An additional challenge facing salmon is the destruction of their traditional spawning grounds through man-made structures, deforestation, climate change and habitat encroachment. You can read more about how salmon find their way back to their spawning grounds on our blog and learn more about the salmon life cycle on our infographic page.

One of the important conversations taking place around local salmon recovery is the improved operation or even removal of man-made structures, like dams, on salmon-bearing rivers. The Aquarium continues to advocate for science-based policies that can help conserve our marine environment, and recently took a position supporting the removal of the four lower Snake River dams to help recover and restore critically endangered salmon populations.

The Columbia River basin once saw 10 to 16 million salmon return to spawn, with the Snake River—the Columbia’s largest tributary—welcoming over 4 million returning salmon1. But the cumulative impacts of habitat loss, climate change impacts on ocean temperatures, and the construction of 14 federal dams throughout the basin have nearly decimated these fish populations.

According to the 2017 ESA Recovery Plan, by the early 1990s, "abundance of naturally produced Snake River spring/summer-run Chinook salmon had dropped to a small fraction of historical levels." Many salmon populations in the Columbia/Snake basin have already gone extinct, and nearly all remaining ones are listed as either endangered or threatened under the Endangered Species Act (ESA). 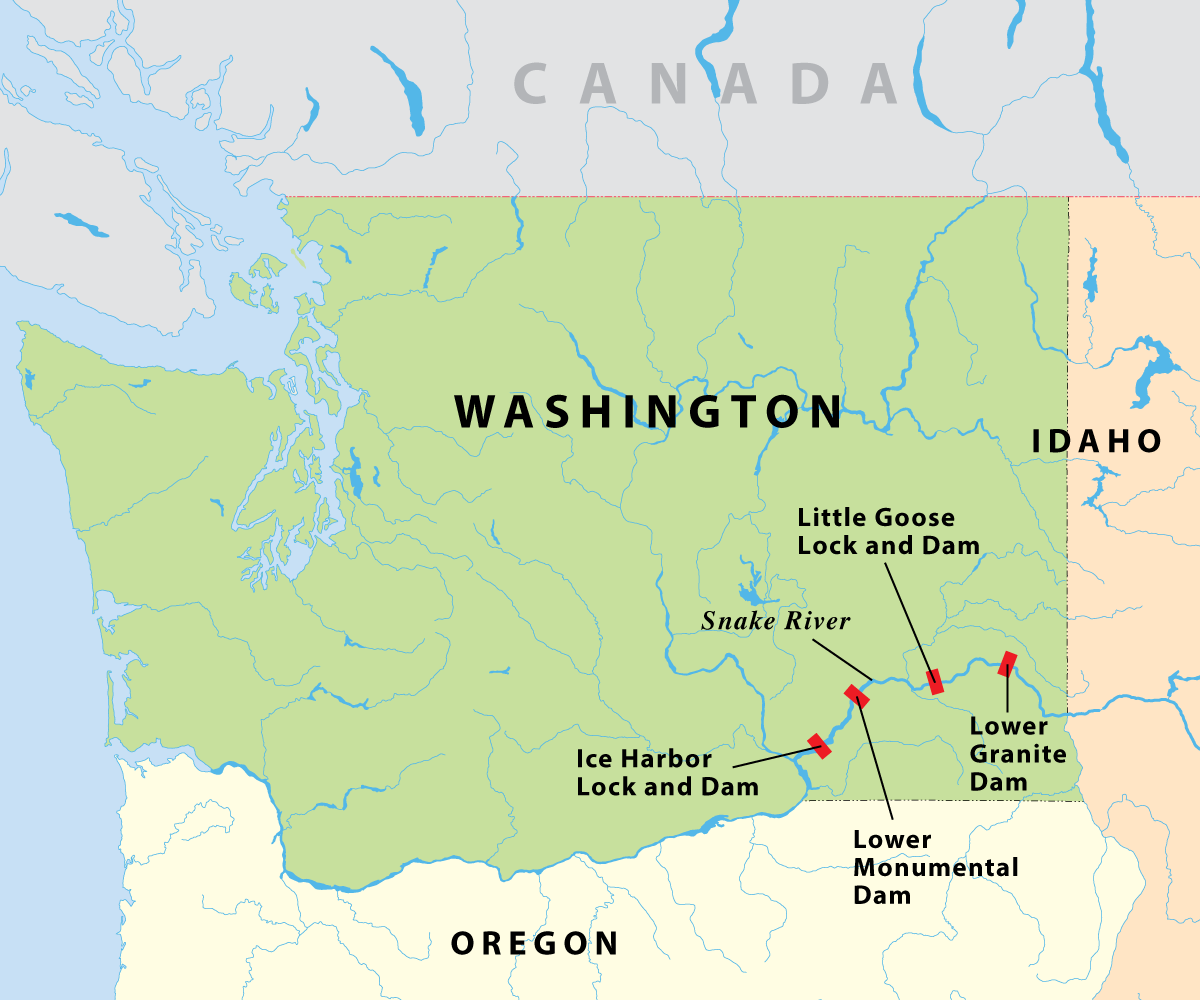 Unlike other dams in the basin, the four lower Snake River dams are not necessary for flood protection. In part for that reason, they have been the focus of discussions about potential dam breaching (removing the earthen embankments and putting other infrastructure out of commission) for more than two decades, with an eye to supporting salmon recovery. The science is clear: breaching the dams would significantly increase spring/summer Chinook returns. It would improve the chance of recovery for endangered Columbia and Snake River Chinook, sockeye and steelhead. It would also require both authorization and significant funding from Congress.

The connection to the orcas

Removing the four lower Snake River dams, as part of a broad suite of measures, could also improve salmon availability in the long term for the endangered southern resident orcas. These orcas spend part of the year off the coast, looking for food, and the science indicates that they rely on Chinook returning to the Columbia River in the spring. See our infographics about the importance of Chinook salmon for the orcas and challenges facing Chinook across the region.

For the orcas to recover, additional measures must also take place in the immediate to near term, including restoring and protecting salmon habitat in other places around the region, reducing vessel noise and disturbance, and reducing toxic runoff.

In February, the agencies that operate the 14 dams released a draft environmental impact statement (DEIS). They found that breaching the four lower Snake River dams would result in the greatest benefits to endangered salmon. They did not select that as the preferred path forward for system operations, however, citing the loss of power generation at the dams, among other factors.

Broader local and regional conversations are needed to arrive at solutions in the basin that will work for both salmon and communities. We look to our governor and legislators to help continue these important conversations, and we thank the governor for the stakeholder engagement work that is already underway.

If you would like to learn more, feel free to read more about our position and the science here.

The Seattle Aquarium will be submitting a comment letter on the DEIS. If you’d like to weigh in on the DEIS as well, you can submit a comment in the agencies’ online form by the April 13 deadline.

Please consider a gift that will help us continue providing the best care for all our
animals, support our staff, support science-based policies to protect marine wildlife, and expand our
at-home engagement and learning opportunities during our temporary closure.