Salmon eggs by the numbers

Even though this year’s Cedar River Salmon Journey is drawing to a close, the Seattle Aquarium is a great place to see and learn about salmon—no matter the season! Take a look at the chinook salmon eggs shown below; they were just added to our salmon hatchery trough. Their developing eyes tell us that they’re about a month old. 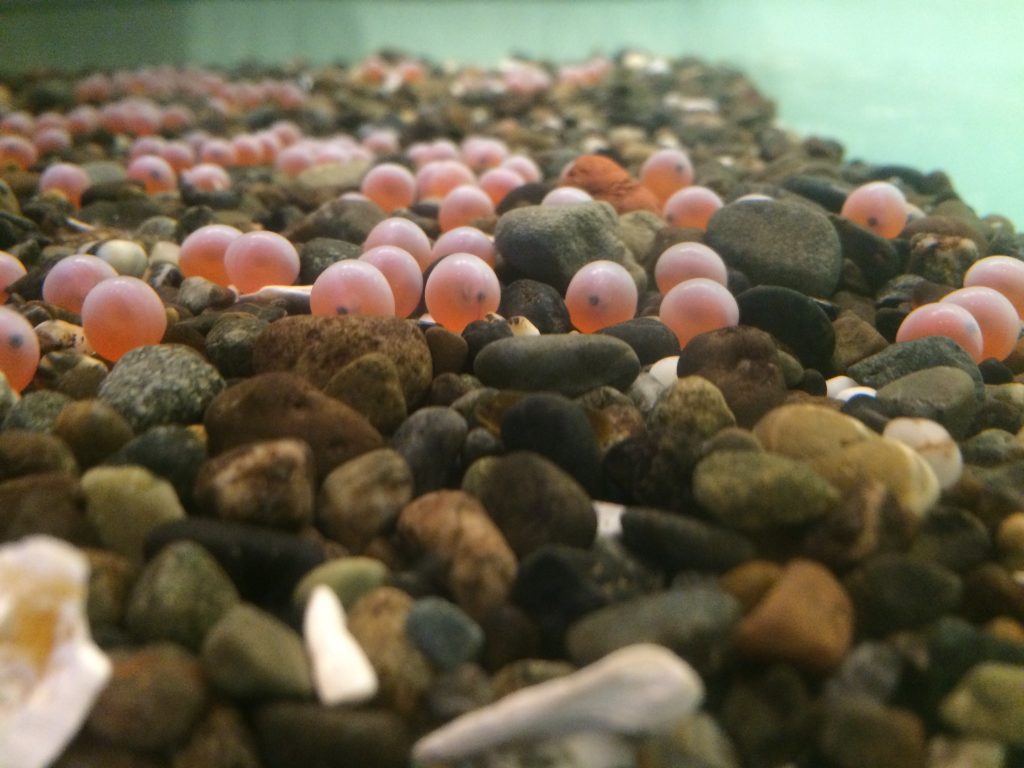 Think that looks like a lot of eggs? For chinook, it’s a drop in the bucket. Chinook, or king, salmon lay more eggs and bigger eggs than other Pacific salmon. Thomas Quinn reports in his book The Behavior and Ecology of Pacific Salmon & Trout that chinook lay an average of 5,400 eggs. Coming in a close second are steelhead with 4,900 eggs, and the other species ranging from 1,000+ to 3,000+ eggs.

In terms of size, chinook eggs weigh almost nothing: about .00066 of a pound! But they’re the heavyweights of Pacific salmon. Chum come in second at about .00063 of a pound—and other species’ eggs are significantly smaller than that.

As a general fish principle, we know that bigger females tend to lay more and bigger eggs, so it’s not a surprise that chinook salmon do both. However, why do steelhead (which are almost as large as a chinook) lay lots of smaller eggs, while chum (which are smaller than both steelhead and chinook) lay fewer, but bigger eggs? An interesting question that we can’t answer!

Want to learn more about salmon migration and salmon in general? Join us for the final weekend of the Cedar River Salmon Journey to talk to trained naturalists while watching salmon spawn! Click here for details.