Ever wondered where the Aquarium gets new animals for its exhibits? Not surprisingly, it isn’t simply a matter of heading to a local beach with a bucket at low tide. Below, staff aquarist Kathryn Kegel provides a behind-the-scenes peek at the Seattle Aquarium’s cold-water collection methods.

Each year, the Fish and Invertebrate team mounts many collecting trips into the local waters of Washington State. The reasons for doing limited wild collections are many. We primarily collect animals that are young—for example, the many young-of-year* rockfish we display in the Puget Sound Fishes gallery. In order to continue displaying these unique critters, they are continually replaced as they outgrow the smaller exhibits (and are sometimes released back to the wild as adults!). Additionally, many of our exhibit animals live short lives naturally and need to be replaced, and sometimes animals are needed for new exhibits. All of our collecting is based off an annual permit which we apply for and receive from the Department of Fish and Wildlife, which states how many animals we are allowed to collect and where we can collect them. Every animal that we collect and bring into the Aquarium is counted and entered into our collection database. The Fish and Invertebrate team collects from the field throughout the year, but our big collecting time is during the summer. We make two weeklong trips to Neah Bay, where the bulk of our cold-water collecting is done. These trips are boat-based SCUBA diving trips with a team of four people, doing a total of four dives per day. We also do a three-day, low-tide collecting trip to the Neah Bay area every other year around May. We do smaller local trips as needed here in the Puget Sound throughout the year for giant Pacific octopuses and eelgrass animals such as tubesnouts. 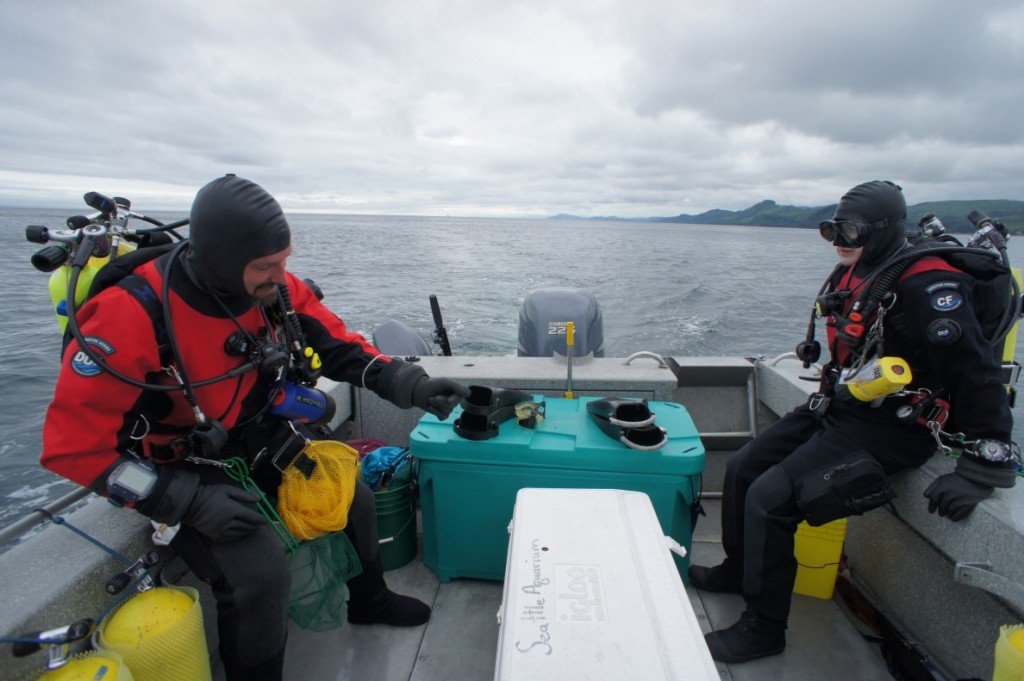 Most of our collecting is done by SCUBA diving. Fish and invertebrates are collected by hand or net and transferred to a water-filled bag until we are back on the boat, where the animals are moved to a cooler. For longer trips with multiple days of diving, we have buckets and barrels with holes in them that are attached to lines with a float on the top. These holding containers stay out in a sheltered, calm bay until we are ready to head back to the Aquarium. Animals are transferred back to the Aquarium in coolers or large totes, on the back of our flatbed truck or in our van. The vehicles are set up with an oxygen system to make sure the water stays properly oxygenated during the trip. We also use ice packs to help keep the water temperature down during transport. Once back at the Aquarium, the animals are counted and then transferred to holding tanks, where they are monitored for a couple of weeks as they acclimate to their new environment.

Visit the cold-water exhibits on your next visit to the Aquarium and ask a staff member or volunteer to show you some recent additions to our animal collection!

*Young-of-year fish are less than one year old and from eggs that spawned in the current year.