Shark alert at the Seattle Aquarium!

It’s probably not what you think—although the world’s third-largest predatory shark was frequently spotted below our pier not that long ago (more on that to follow!). Instead, our attention-grabbing headline was to let you know that, this month, we’re focusing on these amazing, fascinating, often-misunderstood and frequently endangered animals. Join us!

Spark your curiosity for all things shark with this fact-packed blog post, then mark your calendars for the evening of November 12 and the latest installment of our free, livestreamed Lightning Talks series—this one entirely devoted to, you guessed it, sharks! Deepen your shark smarts as a variety of experts give five-minute talks on topics ranging from research and conservation to sharks in pop culture.

Sharks the size of great whites in Elliott Bay!
Sixgill sharks represent a modern manifestation of what could be ancient animals. Sharks very similar to the sixgill are thought to have been present on Earth as far back as the Jurassic period (the time of dinosaurs!). Their name, not surprisingly, comes from their number of gill slits—most shark species have five. 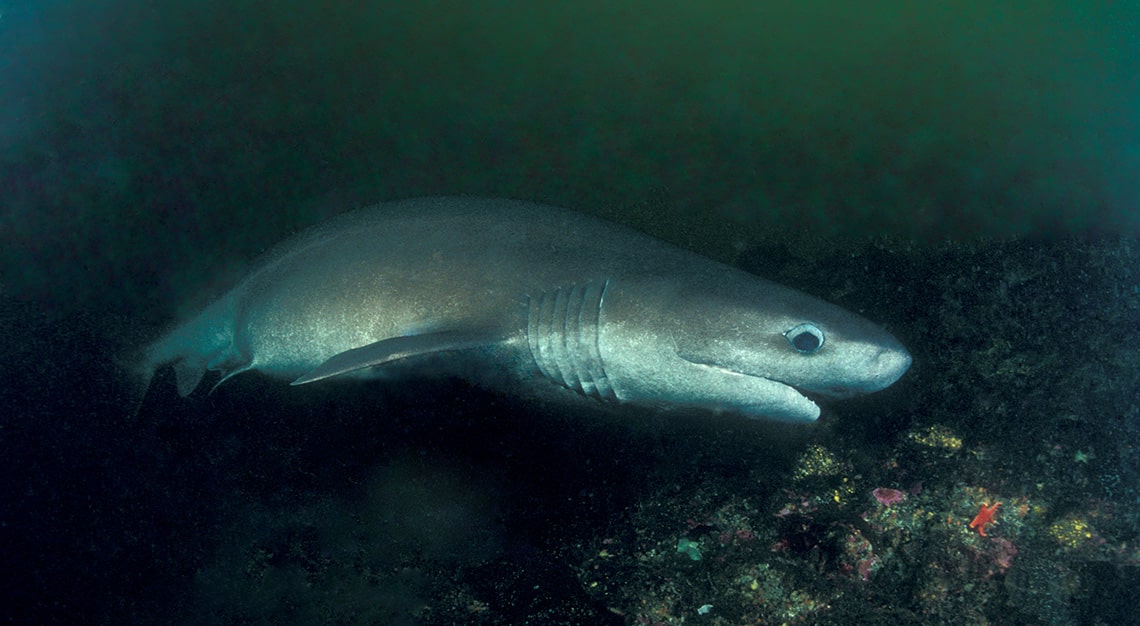 Sixgills are the world’s third-largest predatory shark, comparable in size to great white, and found in tropical and temperate waters worldwide. Because they tend to live deep in the ocean and stay away from light, little is known about them.

But, amazingly, in the 1990s and early 2000s, they were frequently sighted at depths as shallow as 20 feet in Puget Sound. They were even seen in the waters directly below the Aquarium’s pier, which provided us with the rare opportunity to study them for a number of years.

Sixgills, which are listed as Near Threatened by the International Union for the Conservation of Nature (IUCN), haven’t been spotted in our local waters as frequently in the past 10 years. Has their population declined—and if so, why? Were they using Puget Sound as a nursery for juveniles, who grew up and headed into the open ocean? Or have they retreated to deeper waters? No one knows for sure.

Working to restore a shark population across the Pacific
The Seattle Aquarium is helping to launch an unprecedented global partnership to restore zebra sharks to the waters of the Coral Triangle. This area in the western Pacific Ocean is home to such a vast diversity of marine life that it’s also known as “the Amazon of the ocean.”

Zebra sharks are known for their distinctive stripes as juveniles, which transition to spotted patterns as they mature. They reach a maximum length of about 8 feet and live in shallow reef habitats where they can wiggle into crevices and caves to search for prey including fish, urchins and crabs. Native to the Coral Triangle, they’ve been hunted to near extinction—and we’re working to bring them back.

We’re excited to share more about this first-of-its-kind project in the months to come, including details about how we’ll be transporting eggs bred at U.S.-based aquariums to new hatcheries across the Pacific, training shark caregivers in the Coral Triangle, and tagging and releasing the sharks into the wild!

You can make a difference for sharks (and rays)
Here’s a sobering fact: Nearly 25% of all shark and ray species are threatened with extinction. Many of these are keystone species, which means they play a major role in keeping the ocean in balance. It’s not an overstatement to say that, without sharks and rays, the health of the ocean’s food web could be in jeopardy.

Now some good news: No matter how far away you are from the ocean, you can help the sharks and rays that live there. Here’s a short list of how you can make a difference: