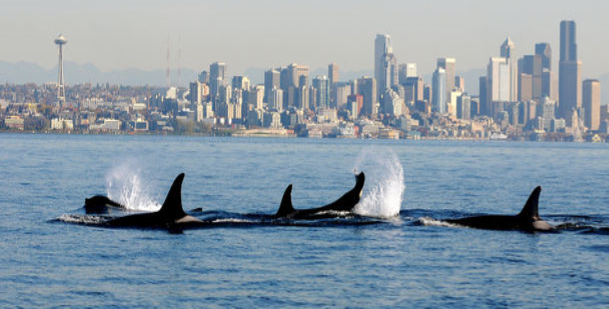 Summer offers the best chance to see our Southern Resident orca pods in Puget Sound, and it’s also the time of year when Aquarium visitors have lots of questions about orcas—especially about how and where they can see them. Thanks to NOAA Fisheries for helping us to provide the information below!

Orcas, also known as killer whales, belong to the Delphinidae family. Does that word look familiar? If you think it has something to do with dolphins, you’re correct—and orcas are the largest dolphin in that family. But, due to their size (over 30 feet!), orcas are also considered whales.

Orcas can be found in all oceans and adapt to almost any conditions. They are toothed whales, related to sperm and pilot whales, and apex predators—vulnerable only to large sharks. They travel and hunt in groups called pods. Three types of orcas are found on the West Coast of North America: resident orcas; transient (or Bigg's) orcas; and offshore orcas. Each type has differing habits and eats different kinds of prey.

Southern Resident orcas are the only resident population found in U.S. waters—they’re icons of the Pacific Northwest and inspire widespread public interest, curiosity, and awe around the world. They depend on salmon to survive. They’re also endangered and among the most contaminated marine mammals in the ocean.

The Southern Resident orca population is composed of three pods: J, K, and L. Individual animals are identified by a number based on pod membership and birth order (J2, for example, is the oldest-known member of J pod—she’s estimated to be 103 years old and is also known as Granny).

Where are they seen?

Each year, the Southern Resident orcas spend several months of the summer and fall in Puget Sound. But it’s good to exercise care when deciding how to try to view them. Research has found that orcas spend more time traveling and less time foraging when vessels—including small craft such as kayaks—are present, according to NOAA Fisheries’ 10-year report on the Southern Residents. Orcas also change their behavior by increasing their activity at the surface, including swimming in more erratic patterns, when vessels are close. Regulations and guidelines for viewing orcas from vessels can be found at bewhalewise.org.

What’s the best choice to view orcas without disturbing them? From shore. Lime Kiln State Park on San Juan Island is a prime spot. Other land-based viewing sites—including the Seattle Aquarium—are listed at thewhaletrail.org. We don’t often see orcas from our pier, but it’s been known to happen and you never know, you may get lucky on your next visit!