On January 14 and 15, the Seattle Aquarium convened a gathering of experts from around the country to discuss the latest findings about sea star wasting disease (SSWD). The disease causes sea stars to waste away, giving the impression of “melting.” In late 2013, millions of sea stars began dying along the entire west coast of North America and in Puget Sound—even along the Seattle waterfront, directly under the Aquarium’s pier. The condition, soon labeled sea star wasting disease (SSWD), caused the animals to waste away, giving the impression of “melting.” Since the end of October 2013, the Seattle Aquarium has been actively collaborating with a variety of institutions—including the Vancouver Aquarium, SeaDoc Society, Cornell University, the Wildlife Conservation Society and the USGS National Wildlife Health Center—to respond to the ongoing unusual mortality event occurring in sea stars along the West Coast. The strange “melting” of sea stars in Puget Sound and along the West Coast has attracted much media attention. Below, Seattle Aquarium staff veterinarian Lesanna Lahner shares an update on our participation in the effort to understand the disease. As you may have seen in a recent KING 5 News segment, some sunflower stars in British Columbia, Washington and California—and even along the Seattle waterfront—have been suffering from a condition that gives the impression of "melting." Join the Seattle Aquarium for Winter Fishtival, where we’ll feature different sea animals and fun activities each day. January 1 is all about the many fascinating creatures that make their homes in tide pools. Join us for hands-on activities, special talks and opportunities to learn more about the care and feeding of the Aquarium's fish, birds, tide pool animals and marine mammals during Winter Fishtival! Each day we'll highlight a different sea animal and activity. Today’s featured animals live in tide pools. Here are some fun and interesting facts about tide pool animals. 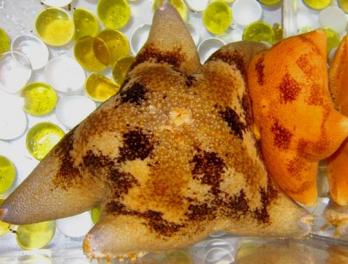 The morning sun star (Solaster dawsoni) eats its own kind. It can swallow small prey whole, but will evert its large stomach to feed on larger sea stars. So, how does it capture and hold onto sea stars that may be larger than itself? 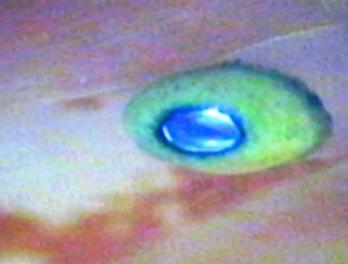 What am I?
I am one of about 60 of what you see in the photo on the left. I may help my possessor see danger nearby or good habitat further off. When touched by a predator such as a leather star, sunflower star, or any of several nudibranchs (including opalescent, striped, orange peel, and diamondback), sea pens have several defenses.