A tale of two (Cedar) rivers 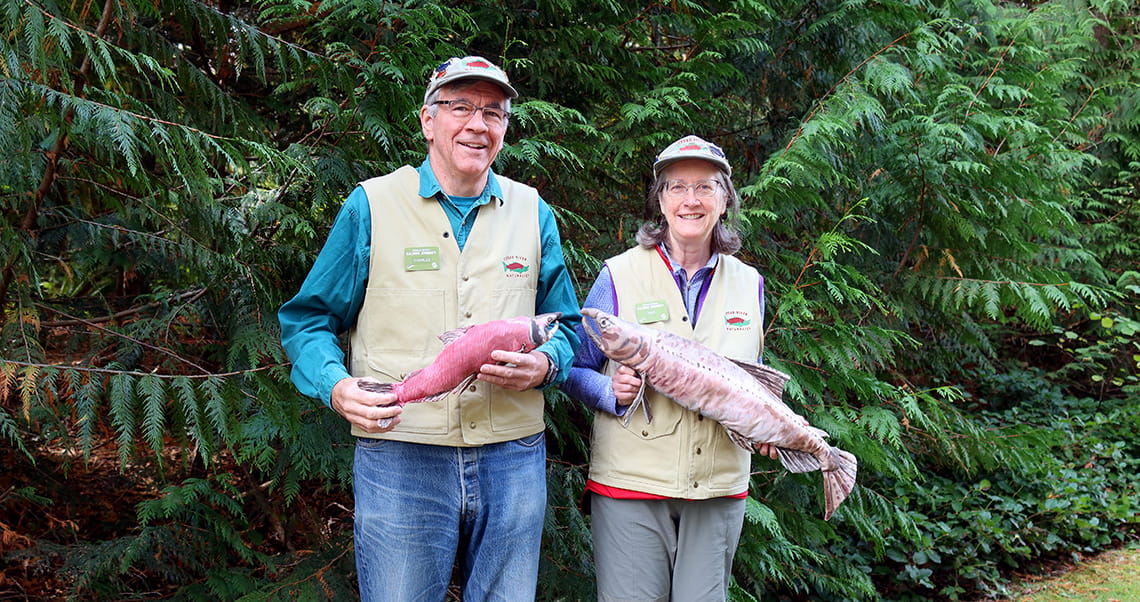 Longtime volunteers Charles and Jane Ruthford holding their favorite props and sporting a pair of the original Cedar River Salmon Journey vests which, in the early years of the program, were awarded to volunteers after six years of service.

“They used to say that the salmon were so thick you could walk across the river on their backs,” says Charles Ruthford, a longtime Cedar River Salmon Journey volunteer. This free, family-friendly program takes place at sites along the Cedar River each fall, offering opportunities for the public to see and learn about salmon, the river and the watershed.

Charles and his wife Jane have been volunteering since 1999—the year after the program launched. “We’ve seen massive shifts in the run and overall health of the salmon in our years as volunteers,” comments Jane. “The sockeye run in particular is having tremendous problems.”

The news is a bit better for Chinook salmon—“We’re seeing a slight uptick,” says Jane—but Chinook, along with steelhead trout, in the Cedar River Watershed are still listed as threatened under the Endangered Species Act.

Changes for better and worse
Charles and Jane have seen plenty of change along the Cedar River through their years of service, and not just in salmon numbers. “It’s interesting to watch how science and research have worked in trying to protect the salmon runs,” notes Charles. “We’ve witnessed many enhancements being put in place to make it easier for salmon to make it to the ocean, and then back to the river again to spawn,” adds Jane.

Even with enhancements in place, salmon in the Cedar River are still struggling. What’s the cause of the diminished numbers? “There’s no single reason,” says Charles. Adds Jane, “As volunteers, we learn about possible factors including warmer water in the ocean and ship canal, lack of light for returning salmon along the Seattle waterfront, fish dying before they spawn, predators in Lake Washington and more.” (Read this message from our CEO to learn about improvements along the waterfront that are helping with the lack of light!)

“And yet,” Charles continues, “The moments when we have to say ‘we don’t know’ are some of the most rewarding. It’s a challenge to understand all the factors that are affecting the fish.”

Fast fact: The Cedar River Watershed provides two-thirds of the water used by King County residents and businesses (over 100,000,000 gallons per day!). It also contributes over 50% of Lake Washington’s inflow—which means that it keeps the floating bridges afloat and allows the operation of the Ballard Locks.

Not sure what a watershed is? You’re not alone. It’s defined as an area of land that channels rainfall and snowmelt to creeks, streams and rivers—and, eventually, to outflows such as lakes, bays and the ocean. Put another way, a watershed is like a basin: all the water that falls within it flows to the lowest point, at which it drains. No matter where you live, even if it’s very far from a body of water, you live in a watershed—and your actions affect its health. The river as a superhighway
And, as the salmon demonstrate so well, the movement isn’t all downhill. “The river is like a superhighway, with traffic moving in both directions,” says Charles. “And when fish return to their native streams, they bring nutrients from the ocean up the river with them.”

Here’s a particularly fascinating example of the interconnectedness of the ocean to the land, even when that land is hundreds of miles away: “When spawning salmon die, their carcasses are often picked up by animals and carried away from the river before being eaten, and what remains of the carcasses after the meal is then absorbed by the soil,” says Charles. Adds Jane, “We learned about an isotope found only in the ocean, not in freshwater, also being found in trees 50 yards from the river!”

You can make a difference
Since joining the program, Charles and Jane have made many changes in their daily lives that help protect salmon, the river and the watershed. “We don’t fertilize or water our lawn,” Jane says. “We’re aware of runoff and don’t want to add pollutants to the groundwater.” Adds Charles, “We also use a commercial carwash and dispose of paint properly.”

Our website has some other great tips for making a difference for salmon and the watershed—check it out!

Join us
Interested in learning more about salmon, the Cedar River and its namesake watershed? Charles and Jane can’t volunteer on the river this year due to the pandemic, but you can still join us for this year’s virtual version of the Cedar River Salmon Journey.

Visit our website for all the details—including an offer for a free pair of glasses that make it easier to spot spawning salmon; downloadable activities; an invitation to our webinar; and more!

Please consider a gift that will help the Aquarium continue to provide the best care for its animals,
advance science-based policies to protect marine wildlife, and expand at-home and
Aquarium-based engagement and learning opportunities.