Volunteer as a diver at the Aquarium? “Do it!” says Whitney Golay

Welcome to the first in our series of blog posts devoted to some of the amazing people who volunteer for the Seattle Aquarium. We’ll be highlighting others in the weeks to come. Interested in becoming a volunteer yourself? Scroll to the bottom for details! 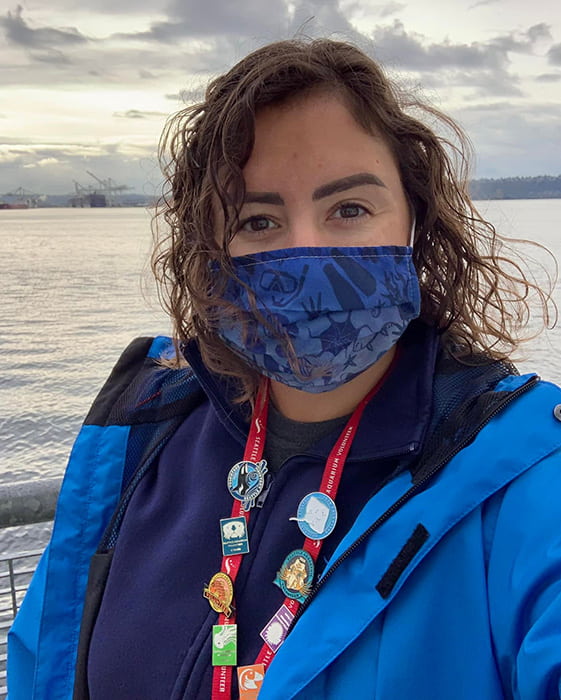 Whitney proudly displaying her many volunteer pins, earned over her many years of service to the Seattle Aquarium(thank you so much, Whitney!).

Whitney Golay started volunteering for the Aquarium in 2012 as a beach naturalist. In 2014, she added diving to the mix and, at last count, had logged more than 550 hours of service—all of them in our Pacific Coral Reef habitat. “It’s essentially a mini vacation where I can see tropical fish up close without having to go to Hawai‘i,” she says, “And I’m giving back at the same time.”

But Whitney’s appreciation for the marine environment isn’t limited to tropical waters. She studied marine biology at the University of Washington because of her love of the Salish Sea—a love she shares with her dad. “When I was growing up, my family would spend weekends on the Kitsap Peninsula, checking out all the tide pools and some of my favorite Salish Sea creatures, nudibranchs,” she says.

Whitney’s journey to becoming a diver started in 2010, while she was working in Friday Harbor, analyzing underwater rock wall photos on a computer. When a co-worker signed up for a scuba class, she decided to join. “And, a few months later, I was getting to look at all the underwater sights that I’d been staring at through the computer screen,” she comments. She got her dive masters in 2014 and started volunteering for us the same year. 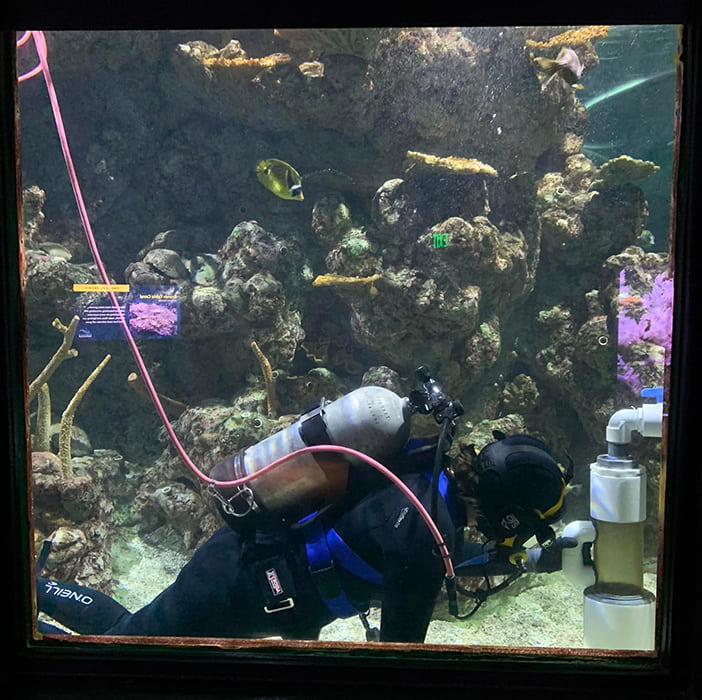 Now, Whitney spends her volunteer shifts diving in the warm-water habitats at the Aquarium, where she feeds the fish, watches the antics of the porcupinefish (one for her favorites), cleans the habitat and waves to guests on the “dry side.” She especially loves waving to young girls, who she hopes are inspired to share her passion for the ocean and conservation.

When asked what she would say to someone who is considering becoming a volunteer diver at the Aquarium, her short answer is, “Do it!” She adds, “It’s a unique opportunity. You're able to see some of the species up close that you are never going to see otherwise.”

Potential volunteer divers are required to have a minimum of 12 dives in local diving conditions within the last year and an advanced open water diver certificate. Divers must also commit to at least one three-hour shift at the Aquarium, every other week for at least a year. Interested in learning more? Visit the adult volunteer page on our website and fill out our diver experience form!