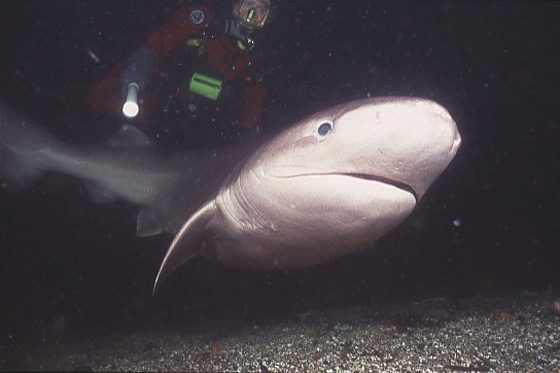 Bluntnose sixgill sharks, or Hexanchus griseus, are members of the cowshark family. Most sharks have five gill slits, but the aptly named sixgills have six. At a mature length of about 14 feet, they are one of the top ten largest predatory sharks of the world – and they not only live in Puget Sound, they can often be found swimming directly below the Aquarium’s pier.

Sixgill sharks are not well understood due to a lack of information on their species and abundance. These reclusive creatures are generally found in very deep water, which makes them difficult to study. Their presence in the shallower waters of Puget Sound creates a unique opportunity to discover more about them.

Sixgill sharks represent a modern manifestation of what could be  ancient animals. Sharks very similar to the sixgill are thought to have been present on earth as far back as the Jurassic era. An ecological implication is that these sharks could have occupied a unique niche at the ocean bottom that may have been present as a stable habitat since that era. Their continued success shows the potential that no more modern sharks have any selective advantage that would make them more successful in this habitat.

Through our research, we are attempting to answer some questions about sixgills’ population dynamics, home range, breeding patterns and relationships with other sixgill populations found nearby.