“When They’re Hungry, They’ll Let You Know”: Caring for Dogfish 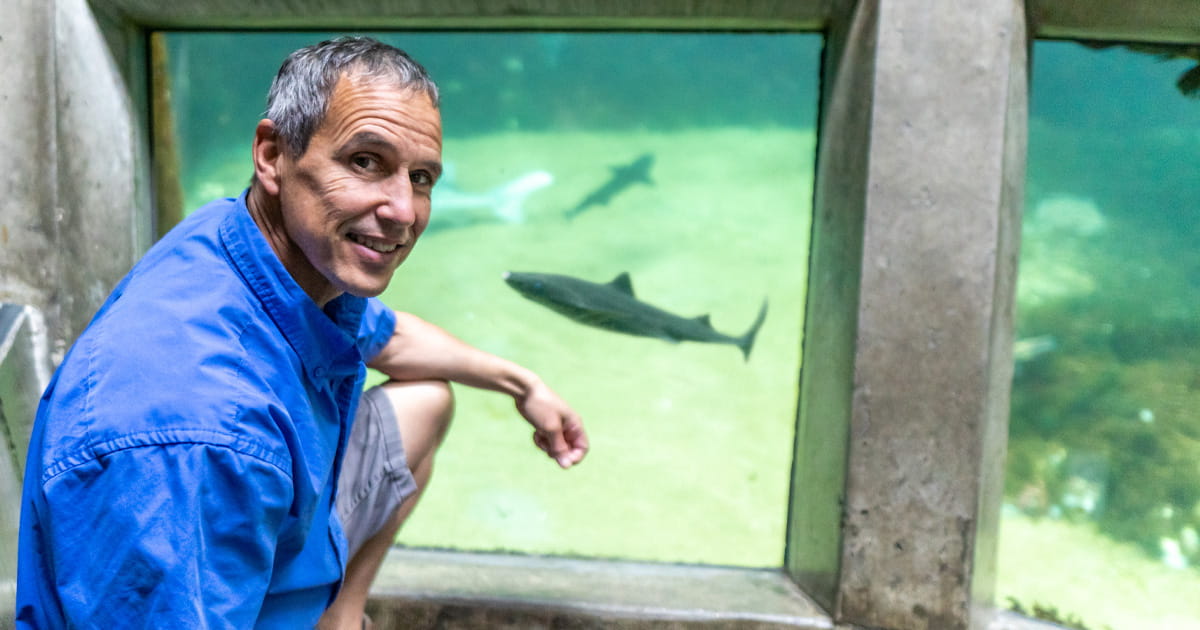 Senior Aquarist Chris Van Damme gingerly holds one end of a herring when feeding Elliott and the other Pacific spiny dogfish at the Aquarium. Dogfish—who are just as enthusiastic about meals as their furry namesakes—can chomp through their food with astonishing speed and force. As Chris shares in our interview, it’s just one of the many reasons these creatures inspire awe and affection from their caretakers.

Q: What do you find fascinating about dogfish?
A: You wouldn’t know it from their name, but dogfish are sharks. They’re a smaller species of shark, but like all sharks, they’re fast and sleek. They can turn on a dime. They’re immensely strong.

Dogfish are also record-setters. They have among the longest pregnancies of any animal: 22 to 24 months. (Fun fact: Dogfish pups are born ready to hunt!) They reproduce late in life—as late as their mid-30s for females—and they live long lives—80 years or more! They’re also remarkable travelers. One of my colleagues found a dogfish in California that had been tagged in Alaska.

Q: What surprises people when they visit dogfish at the Aquarium?
A: Visitors who hear there are sharks living in the Aquarium’s Underwater Dome sometimes mistake the sturgeon—a prehistoric-looking animal—for dogfish. Dogfish are understated. They can be hard to spot, and you’ve got to be patient.

Q: Where can you spot dogfish in the Underwater Dome?
A: In the mornings, unless it’s time to eat, you’ll often see them sitting on the sand at the bottom. At other times, you’ll see them swimming about midway up in the Dome.

Q: How does the Underwater Dome mirror how dogfish live in Puget Sound?
A: First, the water here comes directly from the Sound. Its temperature and salinity match their natural environment. Also, the Dome is a multi-species habitat just like in the wild. And, like in Puget Sound, there are open sandy bottoms where they can rest.

Q: What do dogfish at the Aquarium eat?
A: They eat a variety of herring, anchovy, clam, squid and shrimp. Their diet here mimics their diet outside the Aquarium, and that’s important to their health. 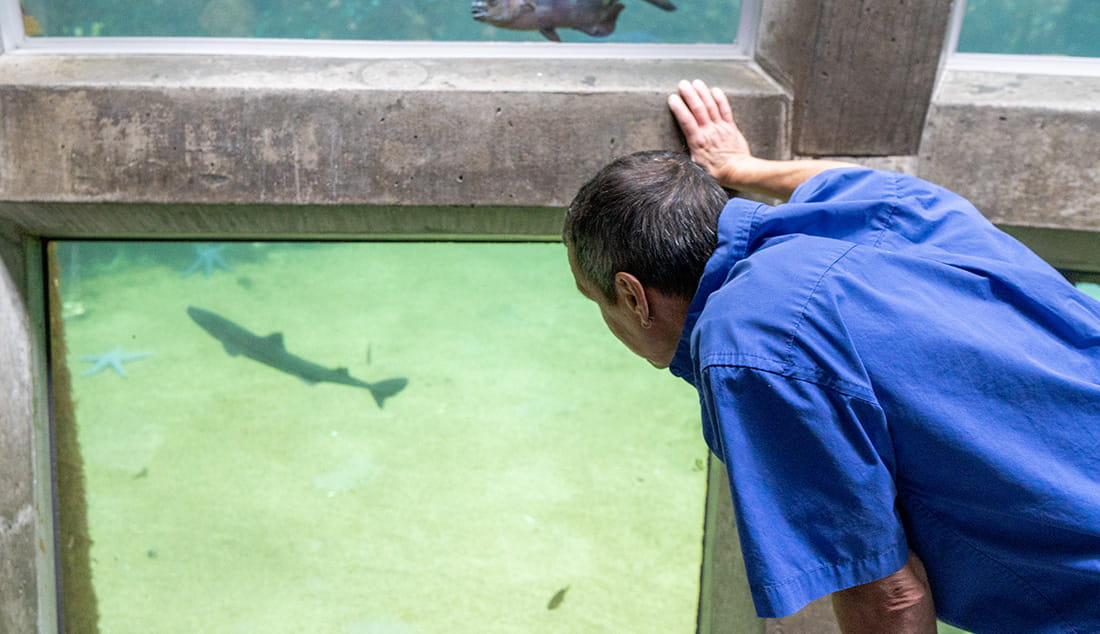 Take your time when looking for the dogfish in the Underwater Dome! They can sometimes be hard to spot as they swim throughout their habitat.

Q: Do they consider other fish in the Dome as prey?
A: No, we dive and target-feed them by hand every afternoon to minimize the possibility of that happening. (And since they are primarily scavengers, it’s a highly unlikely scenario anyway.) We also do a surface feed, where we drop larger pieces of food to the bottom for them.

Q: What is it like to hand-feed dogfish?
A: They have very sharp teeth, so it’s important to release the fish before they get too close!

Q: How do they eat outside the Aquarium?
A: They often hunt in packs like dogs—that’s why they’re called dogfish—and can eat their way through schools of fish. (Fun fact: Dogfish can hunt in packs of up to 1,000!)

That said, dogfish and all the animals living in our local waters are affected by what goes in our sewers and drains. (Tip: Learn how you can protect ocean health on our take action page.)

Q: What is a good pathway to a career like yours?
A: I studied oceanography at the University of Washington, which is a good field for studying the marine environment as a system. Oceanography combines physical, chemical, biological and geological science. If you’re specifically interested in working with sharks or helping to manage healthy shark populations, you should consider studying marine biology.

Q: As a diver, have you encountered dogfish outside of the Aquarium?
A: I can think of only a handful of times I’ve seen them while diving. Their senses are a lot better than ours. They see and hear us before we know they’re around, and they move fast.

They’re beautiful animals. It’s such a treasure and a treat to find one as a diver. It’s a gift.

Now that you’ve read Chris’s thoughts, check out our dogfish page to learn more about Elliott and the other dogfish at the Aquarium. Then test your knowledge of dogfish with our dogfish quiz. On your next visit to the Aquarium, look carefully for Elliott in the Underwater Dome.