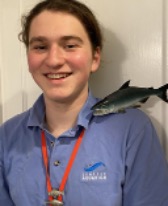 The Seattle Aquarium is tremendously fortunate to have an amazing pool of dedicated volunteers—including roughly 150 Youth Ocean Advocates (YOAs) who share their passion by educating Aquarium visitors, leading beach cleanups, participating in tree-planting events, raising money for organizations working on behalf of the marine environment, and more.

In honor of World Oceans Day, we’re happy to share a guest blog written by YOA Aviv Pinker, who shares his expertise on salmon. Take it away, Aviv!

Hi! I’m Aviv Pinker, a junior at Garfield High School in Seattle. I’ve been volunteering at the Aquarium since summer 2019, and my favorite marine animal is an orca. I’d like to share why I’m passionate about salmon conservation in Puget Sound, but first, I’ll share a little bit about salmon in general!

What makes salmon so special?

The defining characteristic of Pacific salmon is that they are anadromous fish. This means they start their lives in freshwater, migrate to the ocean, then return to freshwater to spawn. How cool is that? After salmon hatch from their eggs, they feed on insects and other prey until they get big enough to swim downstream into the ocean, where they feast and grow for several years. Then it’s homecoming time.

Some sort of internal clock, in combination with environmental factors, triggers adult salmon to return to the river they were born in, where they spawn and then die. (We’re pretty sure salmon rely on their sense of smell to find home; it’s pretty amazing that they can find their way back to their natal cradle using nose power.) During this final migration, salmon undergo a pretty stunning physical metamorphosis, changing from a bright silver to red, copper, brown or dull green depending on the species and sex. Their bodies also change shape, and males especially develop hooked jaws called kypes and large teeth to match. Pretty awesome!

Why are salmon so important?

Salmon are what’s called a keystone species. This means every organism in the food web is linked to salmon, so their health is vital to the health of the entire ecosystem. Salmon feast on zooplankton, small fish (like herring) and squid, keeping their populations in check. In turn, salmon are a main food source for animals like bears, orcas, sea lions, eagles—and humans. Even plants share a key relationship with salmon: they provide shade for young salmon in streams, and the carcasses of dead salmon provide nutrients for these plants to grow. This interconnectedness is why protecting salmon is such a big deal for me—and why it should be for every tree, bear and human, too!

Here in Puget Sound, we have five species of Pacific salmon. Let me introduce you:

King salmon are also known as Chinook, tyee, spring or blackmouth salmon. The largest, rarest and longest-lived of the species, they have been known to grow up to 120 lbs., though a more typical adult is about 25 lbs. Chinook are orcas’ favorite food because of their high fat content (yum!), and their scarcity is a main factor in the orcas’ decline.

Chum salmon are also known as keta or dog salmon. The second-largest salmon, they are the last species to return to Puget Sound streams, arriving in October and November.

Coho salmon, also called silver salmon, are the third-largest species. After they hatch, young coho spend an extra year hanging out in freshwater before heading out to sea.

Sockeye salmon, also known as red or blueback salmon, are the most commercially important species. Unlike the other species, sockeye are filter feeders and eat zooplankton exclusively. Also, sockeye are the only species of salmon that spawns in lakes rather than streams or rivers.

Pink salmon are the smallest and most abundant salmon species and are sometimes called “humpies” for the large bump they develop when returning to freshwater. Because they live for only two years, large runs of pink salmon occur every other year. In Puget Sound, odd-numbered years are “pink years,” but in Alaska, even-numbered years are!

Steelhead are a curious case! They’re anadromous versions of freshwater rainbow trout. Some people consider them salmon because their characteristics and life cycle are more salmon-esque than trout-like. While the line is blurry, one important difference that sets steelhead apart from the five other Pacific salmon species in Puget Sound is a trait called iteroparity: their ability to return to the ocean after spawning rather than dying.

For hundreds of years, salmon were plentiful along the West Coast. Native American communities valued salmon as a primary source of food and celebrated salmon in their cultures. They made sure to take only the salmon they needed to sustain their communities. However, when white settlers came to the Pacific coast, they too began fishing for salmon. In the 1900s, salmon grew in popularity, leading to commercial and recreational overfishing. Nowadays, dams on rivers like the Columbia and Snake block salmon from reaching suitable spawning grounds; urban development and pollution harm the streams that sustain young salmon, while warming ocean conditions reduce the availability of prey. Today, salmon populations are only a fraction of what they once were, and fishing pressure, predation, environmental decline and habitat damage continue to contribute to their decline.

It’s true that Puget Sound salmon are struggling, and it’s clear that we need to do something. Fortunately, there are simple actions anyone can take to ensure salmon are part of our Puget Sound’s future. Remember, helping salmon also means helping orcas, bears, forests and our entire Pacific Northwest ecosystem!

Here’s what you can do to support healthy salmon populations: