Meet Elliott, one of our dogfish named after Elliott Bay—the bay on which the Seattle Aquarium is located.

Look for Elliott in the Underwater Dome habitat during your visit!

Dogfish are small, bottom-dwelling sharks that live along the northern Pacific and Atlantic coasts. They are able to travel long distances, and their habitat can range from dark depths of 3,000 feet to shallower waters receiving ample sunlight. Dogfish can live for over 40 years, and in the Pacific they have even been known to live as long as 70 years. Dogfish don't begin reproducing until later in their lives—we don’t currently have a complete understanding of when they mature, but it’s safe to say that they begin reproducing at some point between 12 and 25 years of age. Their pregnancies last 22 to 24 months, which is one of the longest gestation periods of any animal. Females give live birth to four to 12 pups, which are immediately able to hunt for prey.

Dogfish often hunt in schools. These schools can have up to 1,000 dogfish. Because of their relatively small size, dogfish usually eat small fish, as well as jellyfish, clams, krill, octopus and squid.

Like all sharks, dogfish have skin that is covered in tooth-like scales called denticles. But unlike most sharks, dogfish are also venomous. They have two spines, one in front of each dorsal fin, that secrete a mild venom. These sharp spines serve as a defense mechanism against the dogfish's predators, such as sixgill sharks and seals.

How to help dogfish

Dogfish are keystone predators, and ecologically important in their niche. Like many sharks, they have been historically misunderstood, as well as overfished. Currently, some of their populations are threatened due to a conflux of factors, including their natural predators, a lack of prey, and their popularity as seafood in Europe. One key factor to their threatened status is the fuzzy picture we have of their life cycle: specifically, how long it takes for them to become mature, how many times they can reproduce, and how long they live—all factors critical to setting up a sustainable fisheries management system. And, of course, like all ocean life, dogfish are adversely affected by pollution. Keeping our ocean clean will help dogfish survive. 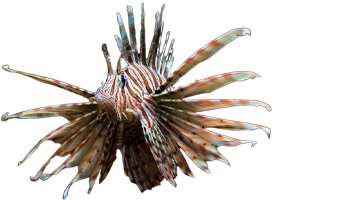 Their large heads represent over half of their total body length!